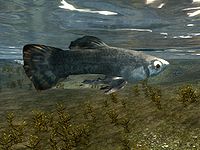 Silverside Perch are fish that can be caught in ponds, lakes, and other bodies of water.

In terms of combinations of two ingredients, Silverside Perch can be combined with 51 other ingredients.