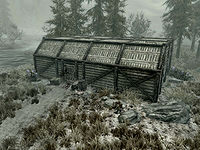 The Abandoned Shack is an isolated house in Hjaalmarch, east of Solitude.

This is where you will awaken the first time you sleep after completing Innocence Lost and receiving the mysterious note. The quest With Friends Like These... will automatically start upon awakening. This is also where you can instead begin Destroy the Dark Brotherhood! by killing Astrid, which will cause the previous quest to fail. The shack cannot be accessed before this point, as the door is locked and requires a key; however, it remains unlocked after you leave it.

There are two barrels and a crate either side of the door. A few feet to the southwest is a rowboat and a crate. There are blood splatters on the door. The following plants are found on the same island as the shack: 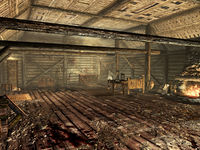 Upon awakening in the shack, you will see in the southwest corner an empty set of shelves with Astrid sitting on top. Against the west wall is an empty, unlocked chest, a small cage, an empty dresser, and another set of shelves. The north wall has a cart, an empty barrel, a fireplace with piles of firewood on either side, and a woodcutter's axe in front. Against the east wall are three kneeling prisoners—Fultheim the Fearless, Alea Quintus, and Vasha—with their hands bound and their faces covered by execution hoods. There is another small cage in the southeast corner. There is a locked door (key required) in the center of the south wall, which leads outside. To the left is a bench, some more firewood, and a chair, while to the right is a mead barrel and a sack. Towards the middle of the room is an unowned single bed with a small table next to it. There is blood splattered over the south, east and west walls. You must kill at least one of the prisoners (or Astrid) in order to get the key either by being given it by Astrid or by taking it off her body. The map marker for the shack is only added after Astrid gives you the key, unless you have already found it prior to being brought here. The shack will remain uninhabited, aside from the corpses of anyone you killed.