A Mysterious Note and a Good Night's Sleep[edit] 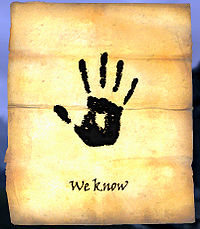 Some time after Aventus Aretino rewards you for killing Grelod the Kind and you've left Windhelm, a courier will approach you and deliver a Mysterious Note bearing the ominous words "We know." The next time you sleep for any duration, you will "awake after a full sleep" to find that you have been mysteriously transported to unfamiliar surroundings. The quest can also sometimes be started after completing Aventus's quest by sleeping in any bed, even before receiving the Mysterious Note from the courier.

You will awaken in an abandoned shack to a greeting from Astrid. She will calmly inform you that your killing of Grelod the Kind has pleased the Dark Brotherhood, but that, in doing so, you stole a contract belonging to the Night Mother, the Brotherhood's disembodied spiritual leader. Thus, you must repay your debt: "A life for a life", as Astrid explains. She will tell you that you cannot leave the room until someone dies. The unpickable door to exit the shack is locked, and Astrid has the key.

You have the option of fulfilling the Night Mother's demand for a life by killing Astrid. Doing this will cause you to fail this quest and immediately start the Destroy the Dark Brotherhood! quest.

If you don't wish to kill Astrid, the room is also occupied by three bound captives. Astrid will inform you that "One of these poor sods has a contract out on their life. Which one is it?" It is up to you to figure out which and then carry out the job. You can refuse to carry out the job, but you can't avoid killing somebody.

When facing them, the captive to the left-hand side is Fultheim the Fearless, a mercenary. He claims to be unaware of anyone in particular who would want him dead, but reasons that, being a sell-sword, any number of people could hold a grudge against him. When intimidated, he also admits, "Maybe there were... times I got carried away? But war is war."

The captive in the center is Alea Quintus, a crass and abrasive mother of six who constantly and irritatingly demands to be released. She indicates that the tough attitude she has adopted to manage so many children might motivate someone to wish her dead. "Do some people look down on me? Have I made some enemies? You're damn right."

The final captive, to the right-hand side, is a Khajiit named Vasha, who casually incriminates himself as an "obtainer of goods, taker of lives, and defiler of daughters." He is the only one of the three who remains calm in the face of imminent death, and mentions that this isn't the first time he's been "bagged and dragged." He also states that "If one of my enemies wouldn't pay to have me killed, I'd take it as a personal insult."

In truth, it doesn't matter which captive(s) you choose. You won't encounter any of them again (unless you return to the shack, and even then you won't be able to learn more). If you kill one or more of them, Astrid will give you the password to the Dark Brotherhood Sanctuary's "The Black Door". You will then be given a key to let yourself out of the shack.

The Dark Brotherhood Sanctuary is located almost due south of the Abandoned Shack, near the southern border of the province of Skyrim and just west of Falkreath.

Upon entering the Sanctuary, the optional Delayed Burial quest will fail if you started it, or be unavailable if you have not started it. If you want to do this minor quest, detour to the quest location, north of Whiterun, on the way to the sanctuary.

When you activate the Sanctuary's entrance, The Black Door, it will ask, "What is the music of life?" Answer with the password Astrid taught you: "Silence, my brother". You will be welcomed to your new "home" and the door will open.

Find Astrid inside. She will welcome you to the family by giving you several pieces of Shrouded Armor apparel, which provide enhancements useful to assassins. (There are also several other Shrouded Armor pieces on a shelf to the right of the room.) You are a now a full member of the Dark Brotherhood, and enjoy all the advantages associated therewith.

Astrid will reveal that she is currently arranging an important job to give you, and that you should, in the meantime, take care of some routine assassination contracts handled by Nazir. She will encourage you to introduce yourself to your new family members and give a rundown on how the Brotherhood operates. She gives a brief history on the Brotherhood and also informs you that they have done away with all rules and policies except for one simple principle, "Respect the Family". You may also learn that the corpse of the Night Mother is en route to the Sanctuary, though she does not know when it might arrive.

She finishes by again directing you to Nazir, assigning you your next quest, Sanctuary.

One achievement is unlocked at the end of this quest: