The UESPWiki – Your source for The Elder Scrolls since 1995
< Skyrim: Quests: Dark Brotherhood / Side Quests
Jump to: navigation, search 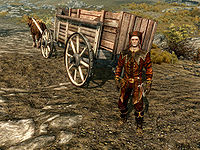 On the road north of Whiterun and near Loreius Farm, you will encounter a very odd jester named Cicero. He claims that he is from Cyrodiil and is moving to Skyrim. His wagon, which he says contains the remains of his mother, has broken down by the roadside. He asked Vantus Loreius, the owner of the nearby farm, to help him fix his wheel, but Loreius refused. Cicero will ask you to convince Loreius to help him so he can move on.

Speaking to Vantus Loreius will reveal that he was unwilling to help because of Cicero's odd behavior, and he speculates that Cicero's box likely contains Skooma or other illegal cargo, and doesn't want to chance aiding him in any illicit activity. Vantus asks that you convince a patrolling guard—either a Roadside Guard or Pale Hold Guard—to arrest Cicero.

To help Cicero, you must pass a very easy level Speech check to persuade Vantus to do the right thing and fix the wagon wheel. Vantus will reconsider and promise to help Cicero on his way. After you notify Cicero, he will thank you and give you a certain amount of gold depending on your current level.

To turn in Cicero, you need to find the guard that patrols the roadway near the farm. He patrols very close to the wagon and is frequently within sight of the wagon. The guard will place Cicero under arrest. Cicero promises to make Loreius pay and chastises you for not being of assistance. After notifying Vantus, he thanks you for bringing him peace and gives you gold. 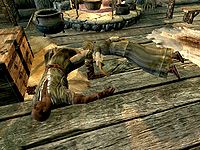 "So many knife wounds."

Cicero is an assassin and the Keeper of the Dark Brotherhood. The coffin he is transporting contains the remains of the Night Mother. Choosing to help Cicero will lead to him showing gratitude if you join the Brotherhood. If you turn him in and later return to the farm, you'll find that Vantus Loreius and his wife, Curwe, have been slaughtered (although if you wait too long the bodies will be gone). A passing guard will remark "You don't want to go up there, citizen. It's a terrible sight. The farmer and his wife murdered in the middle of the night. So many knife wounds." If you later join the Dark Brotherhood, Cicero will be slightly upset with you for not helping him. Whichever attitude he shows toward you will carry no practical implications if you join the Brotherhood.

Regardless of how you resolve the quest, you get the same amount of gold: