The Dark Brotherhood is a guild of professional assassins which historically possessed considerable influence and power but has recently fallen on considerably harder times. It is similar to Morrowind's Morag Tong, but despite a common misconception, it is a completely separate organization; also, the legality of this organization is much more limited than that of its older cousin. The leader of the Dark Brotherhood was the Night Mother, but now that role has fallen to Astrid. The Dark Brotherhood also has a contact in the Riften Thieves Guild. In Skyrim, you can choose to either join the Dark Brotherhood and take on assassinations for hire, or destroy the Brotherhood's last remaining chapter.

Welcome to the Family

Joining the Dark Brotherhood requires you to first complete the quest Innocence Lost. You can start that quest by overhearing a rumor that Aventus Aretino is performing a ritual called the Black Sacrament, speaking to Aventus yourself, or by talking to the orphans of Honorhall Orphanage in Riften about Aventus Aretino.

After completing Innocence Lost, you will be able to join the Dark Brotherhood in the quest With Friends Like These.... 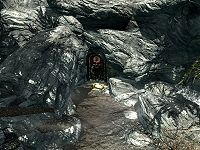 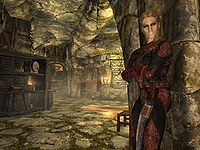 Astrid, leader of the Dark Brotherhood

These are miscellaneous quests (each quest's objective is listed in the "Miscellaneous" section of your journal) and will only activate if certain conditions are met.

There is a radiant dialogue system for the Dark Brotherhood members. The conversation starts with a random line from one participant. This is followed with a random line in response, and a further random question by the first speaker. The final line is still randomly selected, but each member of the Brotherhood has a choice of three unique lines and two generic lines to finish with. Some members have more than three unique lines, but they can only use three depending on the second participant. Other members in the vicinity may chip in with random generic phrases depending on the stage of the conversation.

* These options are only available between these two NPCs, however they can still use other options when talking to each other.