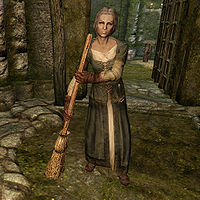 Agnis, a Nord citizen, can be found inside Fort Greymoor. She acts as the joyful maid to whoever holds Fort Greymoor, although she gives the fort commander a hard time in her Complaint Letter. Nazir will give you a Dark Brotherhood contract to assassinate her.

She has her own quarters in the fort, in the northeastern wing, and she sleeps there every night between midnight and 8am. The rest of her time is spent cleaning the surrounding area and neighboring dinner hall, occasionally resting on a chair, eating or taking a nap.

Agnis wears a set of clothes, boots, and gloves. She also keeps a steel dagger on her person, to defend herself in case Fort Greymoor's many masters and visitors prove to be less than friendly.

Agnis lives a strange existence of a servant to whoever hold Fort Greymoor, with her not caring about who that may be. Attempting to speak to her before starting the Dark Brotherhood quest Kill Agnis will have her offer some comments on her peculiar life: "I just cook, and clean, and do whatever it is they ask of me." "I can't even keep track of all the people who have been in and out of this fort. They come, they go. I barely notice." "Hard enough to keep up with who owns this fort. One side takes over, the other runs away. I tell them, "I ain't leaving! I come with the place!" Ha!" "I remember one morning, long time ago, I woke up and the place was run by some Orcs. Went to bed that night, it was all vampires. Don't matter to me." "Now, then. I been gabbin' long enough. Too much cleanin' to do."

Nazir will give you a contract to slay Agnis, with the order being issued by saying: "I need you to eliminate an old woman named Agnis, a servant in Fort Greymoor." Asking for more information on the woman will have him offer you some advice about how if you're aligned to either the Stormcloaks or Imperial Legion while they are in possession of the fort may make infiltration a breeze: "She's a maid. Old, and feeble. But with this contract it's much more a matter of "where" than "who." Your political affairs are your own, but any allegiance you may have in the ongoing war could very well affect your access to Fort Greymoor." If you come to her to fulfill the Brotherhood's contract, speaking to her will have her say: "You fighter types are always underfoot. You want me to clean? Then scat!" which will give you the opportunity to respond from three topics:

After doing the deed and reporting back to Nazir, he will compliment you on a job well done before giving you your payment: "Don't worry, my friend, I'll spare you the facetious quip about killing a defenseless old woman. Infiltrating an occupied fort and making it out in one piece is nothing to joke about. Well done. Your payment for services rendered.