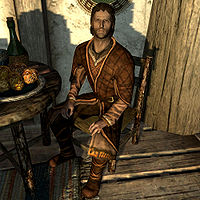 Amaund Motierre is a Breton of questionable background and employment, first encountered within Volunruud with his bodyguard Rexus. He plays a major role in the Dark Brotherhood questline, during which he hires them to assassinate the Emperor. Upon meeting Motierre, you are given a note with vague instructions for three separate killings. It is then revealed that these contracts will set the stage for the death of the Emperor, the main contract for which the Dark Brotherhood has been hired.

Motierre is a cautious man, refusing to divulge any information about himself or his aims. He also refuses to outright reveal the names of the first three targets in his note, instead offering a necklace to cover the costs of investigating the vague instructions therein. Delvin Mallory identifies the necklace as being uniquely made for members of the Emperor's Elder Council, which leads Astrid to deduce Motierre's motives: "Motierre, you naughty, naughty boy. Hiring the Dark Brotherhood to help you rise beyond your station. Delicious." After completion of the contract, Motierre expresses his profound gratitude, saying that you have done the Empire a greater service than you might realize.

He wears fine clothes and a pair of fine boots. When he moves to the Bannered Mare, he also carries a flawless garnet, a flawless ruby, a sapphire, an emerald, and a diamond.

The Silence Has Been Broken[edit] 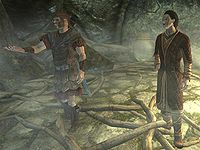 When met at Volunruud during the quest, Motierre will greet you upon sight: "By the almighty Divines. You've come. You've actually come. This dreadful Black Sacrament thing... it worked." You will be presented with three dialogue options:

You can then tell him to go on, and he will continue, "As I said, I want you to kill several people. You'll find the targets, as well as their manners of elimination, quite varied. I'm sure someone of your disposition will probably even find it enjoyable. But you should know that these killings are but a means to an end. For they pave the way to the most important target. The real reason I'm speaking with a cutthroat in the bowels of this detestable crypt. For I seek the assassination of... ...the Emperor." Once again, you will have three responses to choose from:

Regardless of how you choose to respond, Amaund will end with "Rexus will now give you two items which must be passed along to your superior. The sealed letter will explain everything that needs to be done. The amulet is quite valuable - you can use it to pay for any and all expenses."

When spoken to after the attack on the Dark Brotherhood Sanctuary, Amaund will be shocked to see you: "What is it? I said I didn't wish to... be disturbed." Whether you choose to tell him you have unfinished business with him, that Sithis is due a soul, or remain silent, he will reply, "By the gods. You... you're alive! But I had heard... your Sanctuary... Please! You mustn't think I had anything to do with that! I wanted the Emperor dead! The true Emperor! I still do! It was Maro! He..." When you demand to know where the real Emperor is, Amaund will be astounded: "You mean, after all that's transpired, the Dark Brotherhood will still... honor the contract? Why, this is astounding news! Wonderful news! The Emperor is still in Skyrim, but not for long. He's onboard his ship, the Katariah, moored offshore in the Solitude Inlet. But you must hurry! If you can get onboard that ship. Kill Titus Mede II, as contracted... I will reveal the location of the dead drop that holds your payment."

Amaund will be very pleased once the contract is complete: "Aha! You're back!" Upon telling him that Titus Mede II lies dead, he will respond, "I know! I know! I received the news not moments ago! Ha ha! This is glorious! My friend, you may not realize it, but you have served the Empire, indeed all of Tamriel, in ways you cannot possibly imagine. Ah, but you care little for politics, am I right? You want money! And money you shall have! Your payment waits for you at a dead drop. It is inside an urn, in the very chamber where we first met, in Volunruud. Now please, go. Collect your money, and let us never look upon one another again. Our business, thank the gods, is concluded."

When spoken to again, he will be bothered: "Your payment awaits. And don't worry, I'm not stupid enough to betray you." You can then tell him that there's actually one more thing to discuss, in which case he will ask, "And what might that be?" You can choose to continue with one of three options:

Whichever your reply, Motierre will dismiss you with "Oh, for the love of Mara, would you please just go?" After this point, he will remain in the Bannered Mare for the duration of the Hail Sithis! quest. Once the quest is complete, he will leave Skyrim for good. If you decide to kill him instead as the Emperor requested, he will say, "But... we had a deal..." as he dies.