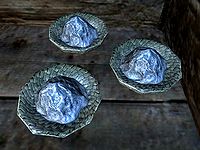 In terms of combinations of two ingredients, Frost Salts can be combined with 56 other ingredients.

47-49(DG) guaranteed samples can be found in 33-34(DG) different locations. Locations with multiple samples are:

Frost salts are dropped by both frost atronachs and frost thralls.