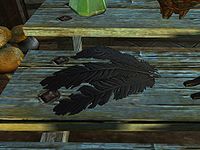 Hagraven Feathers are dropped by dead hagravens, in addition to possible hagraven claws.

In terms of combinations of two ingredients, Hagraven Feathers can be combined with 37 other ingredients.

64 guaranteed samples can be found in 30 different locations. Locations with the greatest numbers are:

All hagravens are guaranteed to drop one feather, and may drop as many as three. This includes the Glenmoril Witches and named hagravens such as Drascua, Melka, and Moira.