Once you reach level 14, you may meet Sam Guevenne in any pub or tavern. He will challenge you to a drinking contest, offering to award you a staff if you win. Sam reaches his limit after his second drink. You can win by taking a third drink, after which a drunken Sam declares you the winner. However, before awarding the staff, Sam wants to take his new drinking buddy to "a place where the wine flows like water". At this point your mental blackout begins and the screen fades to black until the next day. 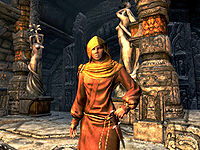 "Wake up! That's right, it's time to wake up, you drunken blasphemer!"

You will be woken by Senna, the priestess in the temple of Dibella in Markarth. When you ask about what happened, she states you were blathering about a wedding and a goat, or blaspheming the statuaries by fondling. You apparently made quite a mess of the temple, so she asks you to clean up the temple and make amends.

If you apologize, you will learn a little bit more information about what happened. You will have to pick up several seemingly meaningless items, namely, a giant's toe, two bottles of Alto Wine, and a confusing note from Sam. According to the note, you need these items, now marked as quest items, and a Hagraven Feather to fix the staff you were promised. You can skip the cleanup through persuasion or bribe. If you avoid cleaning up, you need not worry about trying to get the items.

After you clean up the temple, the priestess tells you that when you got there you were saying something about Rorikstead. 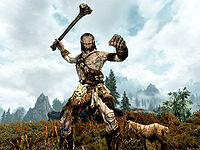 Head on to Rorikstead and when you arrive, look for Ennis. He will indignantly rebuke you for stealing his prized goat, named Gleda, and selling her to a giant. To get the information you need about Sam and the staff, you can pay Ennis 1000 gold for the goat, persuade him, intimidate him, or simply retrieve his goat.

To get Gleda, head south to find the goat wandering around near a giant named Grok. The giant is non-hostile, but once you get the goat to follow you, Grok will decide to attack. It is possible to steal Gleda without incurring Grok's wrath if you sneak up and "talk" to Gleda and then immediately run before Grok notices you, or yield to Grok if he does attack you. Gleda will follow you no matter how fast you run. Another option is to cast Calm on Grok before engaging with Gleda. Grok will not care that you have taken Gleda for the duration of the spell. If you are skilled enough, you can kill Grok.

Lead the goat back to Ennis to learn that you mentioned something about paying Ysolda in Whiterun for a wedding ring. 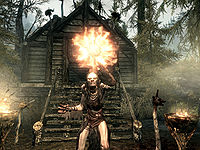 ... and Moira won't let go of the wedding ring

Go to Whiterun and find Ysolda. She says that you bought a wedding ring on credit from her, but since there isn't going to be a wedding, she wants the ring back. Your options are much the same as earlier conversations: you can persuade or intimidate her to get the information about Sam, pay her 2000 gold for the ring, or find the ring.

If you choose to get the ring, find your "fiancée", Moira the hagraven, who awaits you at her hut in Witchmist Grove:

"Darling! I've been waiting for you to return, to consummate our love!"

Your only option is to ask for the ring back. Moira gets mad and turns hostile:

"What? You want it for that hussy Esmerelda, with the dark feathers – don't you? I won't let her have you!"

Kill her and take the wedding ring from her inventory.

Once you have the ring, return to Whiterun and give it to Ysolda to learn where you were going to have the ceremony: Morvunskar. 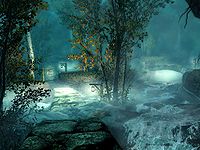 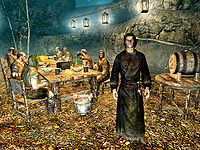 "You're here! I was beginning to think you might not make it."

Having learned of the wedding's location, head over to Morvunskar. You will find a lot of hostile mages both outside and inside there. Fight your way into the fort. Eventually, after descending one, then ascending another stairway, a ball of blue light will appear. Enter the light and you will be transported to Misty Grove. Follow the path and you will find a party already in full swing, including your drinking buddy Sam. Sam will eventually reveal that he is actually the Daedric Prince of Debauchery, Sanguine. He will tell you that he was introducing some merriment and subversion into the world and was encouraging you to go out and "have fun". The items he had you bring to repair the staff, it turns out, are pointless, and will no longer be quest items. Sanguine will reward your efforts to track him down with the Sanguine Rose and will teleport you back to the pub where you met him.