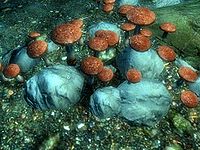 Blisterwort is a variety of fungus that is commonly found growing in caves. Several people recommend combining blisterwort with wheat to make a potion of restore health.

In terms of combinations of two ingredients, Blisterwort can be combined with 48 other ingredients.

24 guaranteed samples can be found in 17 different locations. Locations with multiple samples are:

There are 254 blisterwort mushroom clusters found in 44 different locations. Locations with the greatest numbers are: