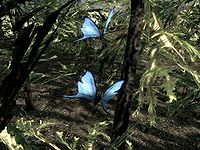 Blue Butterfly Wings can be acquired by catching blue butterflies. You receive two wings for each butterfly you catch. They can be used in conjunction with a blue mountain flower and a giant's toe to create the second most valuable (monetarily) mixture in the game. It has the same alchemical effects as chaurus hunter antennaeDG and ancestor moth wingsDG.

In terms of combinations of two ingredients, Blue Butterfly Wings can be combined with 41 other ingredients.

13 guaranteed samples can be found in 11 different locations. Locations with multiple samples are:

Butterflies appear at butterfly spawning sites. Each spawning site generates up to three butterflies, with a random mix of both blue and orange varieties, between 6am and 6pm. The same sites also generate luna moths and torchbugs between 8pm and 11pm. There are 515 spawning sites in 143 different locations. Locations with the greatest numbers are:

Butterflies, luna moths, & torchbugs can respawn if you exit the cell and reenter. In cities this can be done easily by going in & out of the main gate or by entering and exiting a building. There is a spawn point outside Honorhall Orphanage in Riften and spawn points inside and outside of Solitude that can be repeatedly collected quickly.