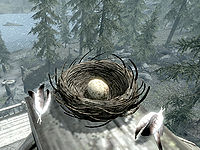 Hawk's Eggs can be harvested from hawks' nests.

Hawks' nests look like other birds' nests which can be found throughout Skyrim, but you can tell the difference before seeing their name by the hawk feathers which may be lying next to them. They are only found in two places in the game, making these the only two sources of the ingredient: On the roofs of Heljarchen Hall and Lakeview Manor after building the Main Hall addition. You can reach these nests with a tower-style addition, or by using Whirlwind Sprint from a proper position for either property. You can also climb up the rocks next to Lakeview Manor and jump to the roof.

In terms of combinations of two ingredients, Hawk's Eggs can be combined with 45 other ingredients.