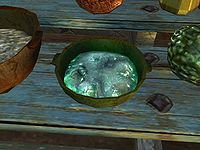 Spriggan Sap is only available as already-harvested samples. Contrary to what is stated by the official Game Guide, it is not dropped by spriggans—they drop taproots instead.

It is one of only three (four with the Dragonborn add-on) ingredients with a Fortify Alteration effect.

In terms of combinations of two ingredients, Spriggan Sap can be combined with 33 other ingredients.

18 guaranteed samples can be found in 13 different locations: