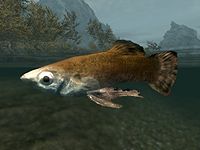 Histcarp are fish that can be caught in ponds, lakes, and other bodies of water.

They are one of only three ingredients in the base game with a Waterbreathing effect; however, the Hearthfire add-on adds two more: Hawk's Egg and Salmon Roe.

In terms of combinations of two ingredients, Histcarp can be combined with 53 other ingredients.

There are no guaranteed samples of histcarp. Nevertheless, it is categorized as a common ingredient, meaning that all apothecary merchants have a 36% chance of carrying 1-5 samples. In addition, it may be randomly found in some barrels and in apothecary's satchels. Other possible locations for already-harvested samples include: