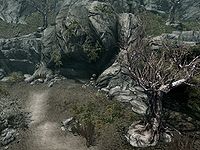 There are many samples of glowing mushrooms and chaurus eggs that can be collected from within this cave system. The easiest way of finding the cave is to travel to the Old Hroldan Inn, then travel southeast from there. The cave is found on the far side of the river from the inn.

There are many mudcrabs and slaughterfish along the banks and in this part of the river. Several juniper trees line the route, and a couple hanging moss plants as well as three fly amanita grow around the entrance. 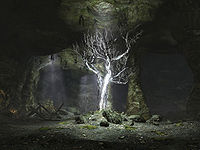 Upon entering, you find yourself in a natural cave with an imp stool fungus growing in front of you against the cave wall to your right. The tunnel turns to the southeast, and you can see a tree bathed in a pool of natural light from above. As you move forward, you will see a juniper tree off to the left in another pool of light; on the wall beside this is a mora tapinella growing on the cave wall. As the cave opens up, there is a bleeding crown fungus to the left. Following the cave around to the left, you come to two patches of blisterwort together, near the juniper tree. Farther around there is a tunnel heading to the northeast, with a lit brazier to the right of the entrance. There are two rock pillars in the cave, and above you on the southwest wall is a ledge.

Following the tunnel to the northeast, after a short distance the tunnel turns to the southeast and then opens into another cave with a juniper tree. On your left is a partially buried cart with a pickaxe inside and another beside it. To the right of the tree, the cave is staggered and continues to the southeast. Tread carefully, as there is a Falmer patrolling this area. Along the right-hand wall is a bleeding crown, a fly amanita, and a pickaxe on a barrel. Continuing forward, you pass under a wooden scaffolding tower with another pickaxe next to a bed roll underneath and a bleeding crown on the left. To the right of this is a barrel with a copy of the Restoration skill book Withershins on top. Past this you come to a junction with a corundum ore vein on the ground in front of you, as well as a path continuing toward the southeast and another path on your right to the south-southwest.

Taking this second tunnel leads to a small cave with two chaurus, several chaurus eggs, and a bleeding crown. Fighting the chaurus may well alert several Falmer who come to investigate. The exit to this cave is to the southeast, and comes out above a second path below. There is a blisterwort fungus in front of you. Turning right takes you past a bleeding crown and a blisterwort along a ledge over and along the left of the below path. The ledge continues to the northwest, and the path below opens into an open area with several cages, a Falmer tent, and stairs up at the far end. Caution is needed as you pass a couple crates and barrels, as there is a Falmer lurking here. The path then splits again. To the left, the ledge follows the cave around and descends to the lower area. On your right, it joins with a wooden scaffolding structure that goes around a rock pillar before exiting the cave heading northwest.

Back at the original junction and continuing straight ahead past the first corundum ore vein, the tunnel bears to the southwest before you come to a dead goat with a broken cart to the left. Just past these is a braced section of tunnel, with the other path overhead. On the ground behind this is a corundum ore vein. Entering the open area at ground level, you pass between two cages, both adept-locked, with the one on the right holding a skeever. Next is a table to the left holding a woodcutter's axe and a leather helmet, past which is a cart on the left and a damaged cage on the right containing a dead bandit. You will also find a third corundum ore vein ahead. Against the north wall near the cage with the skeever is an imp stool and a bleeding crown. Farther to the left is the Falmer tent, which contains an unlocked chest. Continuing to the southwest, you pass several of the supports for the wooden scaffolding. By the bottom of the earthen ramp back up to the higher ledge is a bookcase holding two pickaxes and a random poison. Opposite this in the western corner is a set of shelves containing a knapsack under a scaffold tower.

On the ledge, after taking the path that crosses the room around the rock pillar, you will exit into a tunnel heading northwest. You will find an unlocked chest on your left; opposite this is a straw bale and a stack of crates and sacks. Among these is a bottle of alto wine, a pickaxe, and a knapsack. Past these items is a smelter and a bleeding crown, followed by the entrance to Gloomreach Hive.

Upon entering, you will be in a tunnel that twists and turns until you come to an arch with glowing mushrooms above. There is a patrolling Falmer around this area who may have already set off a tripwire that activates a claw trap hinged on the left. Just past the tripwire is a path that leads to the right and winds its way around and down in the next room. To your left is a ledge to the south. There is another Falmer and a chaurus here; while fighting these, a third Falmer is likely to come up from below to investigate. The south tunnel leads into a small cave only containing chaurus eggs. Descending the path around the room, you pass an imp stool, three bleeding crowns, and a second imp stool. At the bottom is a path heading to the southeast. Before going in that direction, there is a third imp stool against the north wall, and in the water is an unlocked chest and a lootable skeleton floating on the surface. On the ramp starting underwater to the northwest that leads back out of the pool are two blisterwort and a bleeding crown under the water. There are also two Namira's rot, one on either side of the tunnel heading southeast.

Follow the tunnel as it twists and turns and rises until you reach a closed gate. Two Falmer are in this area. One is patrolling near you and the other is off to the left near the back of the cave; a third will investigate any fighting from a ramp leading up from below to the south. In the eastern corner is a Falmer tent, and along the back is a fence with an unlocked chest next to it. Descend the ramp to the south, which leads to another Falmer tent with an unlocked chest to the left of it. If you have come to Gloomreach to retrieve an item, this is where you will find it. The path makes a couple switchbacks to reach the floor of this room. There is a final Falmer in a Falmer tent up a rise to the northwest. On the cave floor, you can find many fungi: four blisterwort, an imp stool, two Namira's rot, and three bleeding crown. There is a closed gate to the south that leads to a shortcut tunnel that returns to Gloomreach, ending on the ledge previously seen near the exit from these caves.