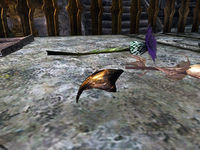 Hawk Beaks can be found on dead hawks, along with hawk feathers.

In terms of combinations of two ingredients, Hawk Beaks can be combined with 51 other ingredients.

1 guaranteed sample is found in the following location:

Hawks can be seen flying in the sky or found near their nests. When shot down, each hawk can be looted for one hawk beak and three hawk feathers. There are 67 nests in 17 different locations where hawks can spawn. Locations with the greatest numbers are: