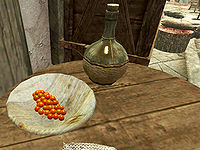 Salmon Roe is an ingredient that can be harvested from jumping salmon in streams (non-jumping and dead salmon do not carry any). Salmon killed with an Unrelenting Force shout or a bow will also yield Salmon Roe. Three salmon can be killed at once by the weakest version of the shout.

In terms of combinations of two ingredients, Salmon Roe can be combined with 55 other ingredients.

1 guaranteed sample can be found in up to 3 locations.

Salmon can be found in almost every flowing body of water. Locations with guaranteed jumping salmon are:

Salmon that swim in shallow water (areas that are marked as pond water), such as the area near the East Empire Company Warehouse near Solitude or the fish hatchery at Windstad Manor, will yield salmon roe when "killed". They will not yield roe if they are simply harvested.