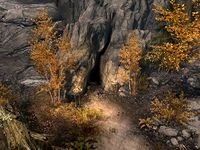 Dayspring Canyon is the wilderness area surrounding Fort Dawnguard. The cave entrance to the canyon is southeast of Riften, just north-northeast of Stendarr's Beacon.

†The grindstone and tanning rack are on the roof of Fort Dawnguard, reachable by climbing the west stairway inside and exiting at the top. While these are technically in Dayspring Canyon, as opposed to part of Fort Dawnguard, they can only be accessed via the fort. 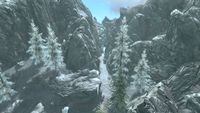 The entrance to the canyon is through a narrow fissure in the rock wall a short distance farther east of the path that leads up to Black-Briar Lodge, along the road leading to Morrowind. It leads into a narrow crevice that eventually opens out into the isolated canyon. It is the only available route to Fort Dawnguard the first time you go there. 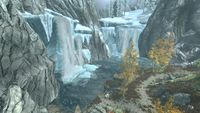 Waterfalls in the canyon

Once through the fissure, there is a snowy path heading east with a few snowberry bushes along it. As the path turns to the southeast, it widens to offer a view of a pool which is fed by melting ice falling as waterfalls from the surrounding peaks. The fertile canyon contains many fauna and flora, including blue, purple, and red mountain flowers, spiky grass and thistles, several types of fungi, including bleeding crown and fly amanita, many butterflies and blue butterflies during the day, and torchbugs and luna moths in the evenings and at night. The pool is full of salmon, and there are mudcrabs nearby. Rabbits, foxes, and elk abound in the canyon.

The path leads down past the shore of the pool, where you find a rowboat and two racks, one holding seven whole salmon, and the other drying a net with two food barrels nearby. Past this point, the path turns to the north. Ahead, you get your first view of a fort to the northeast. Farther uphill to the north is an entrance to Mossy Glen Cave. As you near, the fort is identified as Fort Dawnguard. It appears to be a vast, sprawling structure. The path continues past the start of a wooden palisade wall, with some barrels of food behind. Some tools and a saw horse are nearby, implying the palisade is recent work. On your right is a wooden lookout platform. The path passes under an arch formed by a walkway far above. Beyond the arch is a campfire, with Durak standing nearby practicing with a crossbow, and a wood chopping block to the left. You can recover many steel bolts from the tree stump Durak has been using for target practice.

Beyond this area is a fenced vegetable patch containing eight gourd plants, seven cabbage plants, and five potato plants. The path then turns to the south and approaches the entrance to the fort. On your left is another wooden palisade wall, with a gap in the middle. On the other side of the wall, most of the trees have been cut down for the construction. There are two snowberry bushes in this area, and in the northern corner, another entrance to Mossy Glen Cave. To the right of the gap in the wall is another wood chopping block and a woodcutter's axe. The first time you approach the fort, you will meet Agmaer, who has also heard of the vampire hunters and is looking to join. At the entrance, Celann will instruct you to enter to meet their leader.