After freeing Serana, exit the cavern by crossing the small stone bridge on the opposite side of the room you came in from, where you will be ambushed by two gargoyles. After dealing with them, head up to the door located to the right of where the gargoyles were hidden and enter a small chamber. This room contains little of note, except for the numerous skeletons and leveled draugr that will attack when you pull the lever to open the next barred gate. Head through the gate to come to a huge amphitheater with several leveled undead pacing about. Here you will find a boss chest with leveled loot and a word wall that teaches a word of the Drain Vitality Shout. Behind the Word Wall is an altar table with a few coin purses and 2 random enchanted weapons. After dealing with the enemies and getting the desired loot, head out through the gated door at the opposite end of the room from where you came in. 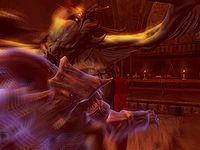 Now, you are ready to take Serana to her father at Castle Volkihar. This location is in the northwest corner of the map. You will be able to see it from a great distance away. The easiest way to get there is to take the boat at Icewater Jetty, which is reachable on foot, by fast travel, or by hiring a ferryman to take you there. Activate the boat and you will arrive at Castle Volkihar.

Bone hawks circle overhead and a stone bridge lined with gargoyles is in front of you. Beyond, the castle looms. About halfway across the bridge, Serana will initiate conversation: she wants you to keep quiet and let her do the talking.

The Watchman will open the gate when he sees his lady. Open the door and step into the castle where Serana's father is waiting. A vampire named Vingalmo will confront you; but he backs off when he sees Serana and goes to announce her to the group gathered in the main hall.

Descend into the hall and watch the reunion between Serana and Lord Harkon. After that, Harkon will initiate conversation with you. He will tell you there is only one thing he can give you to thank you: his blood. You now have a choice to make. You can stick with the Dawnguard and you will be allowed to leave the castle in peace for your service, or you can join the Volkihar vampires and take on the mantle of a Vampire Lord.

If you choose to become a Vampire Lord, Harkon will bite you as everything fades out. When you wake up, you and Harkon will be in the Volkihar Cathedral. Harkon will begin teaching you how to use your Vampire Lord powers, which include raising dead and draining life, as well as a claw attack. He also explains a few things, such as his history and that of his family, if you ask him about them. If you are already a vampire, he will say you just contracted a disease and explain that what he offers you is true vampirism. Alternatively, if you happen to be a werewolf at the time, he will state that he can smell it on you, and can purge you of its filth. Once you are done getting acquainted with your new powers, you will be given a quest to fill The Bloodstone Chalice. 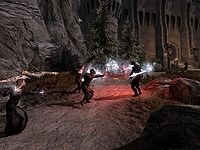 A skirmish between the Dawnguard and the vampires

If you decide to stick with the Dawnguard and refuse his offer, Lord Harkon will cast a spell that will teleport you outside the Castle gate. He also "advises" you to never return. With the castle locked behind you, your only remaining option is to return to Fort Dawnguard and report this new discovery to the Dawnguard. Once you arrive, you will find the fortress under attack by a band of vampires. After defeating the vampire attackers, you should speak to Isran and tell him what you discovered. Following this report, he will give you the duty of seeking out some of his old allies to create A New Order. Following the Dawnguard side of the questline will cause Fort Dawnguard to be rebuilt and refurnished. You will also have access to Crossbow upgrades and Armored Trolls.