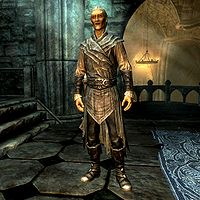 Vingalmo is an Altmer bandit wizard and vampire in Volkihar Keep. He believes magic is more important than strength and can often be seen arguing with Orthjolf. He aspires to become more powerful in the Volkihar vampire hierarchy, and will send Salonia Caelia to retrieve the newly purified Bloodstone Chalice from you during The Bloodstone Chalice.

Vingalmo wears a set of light gray colored vampire armor with a matching pair of boots. He is equipped with a leveled one-handed weapon which can be up to elven quality. He carries random leveled bandit loot, as well as a 25% chance of carrying 1-9 gold.

This Skyrim-related article is a stub. You can help by expanding it.
Retrieved from "https://en.uesp.net/w/index.php?title=Skyrim:Vingalmo&oldid=1838904"
Categories:
Hidden categories: