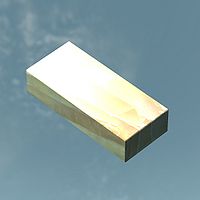 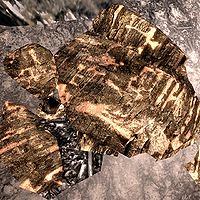 Elven weapons and light armor are medium-quality items that are made using the mineral moonstone. The weapons and some of the armor require quicksilver as well as moonstone. Elven forging techniques were developed by the High Elves and were originally a closely guarded secret (see Light Armor Forging).

There are a total of 44 veins, 6 ores, and 9 ingots at guaranteed locations. Some individual veins that are located outside and are not near any landmarks have been left out of the following list. The Moonstone Veins category also provides a list of locations containing veins, and all exterior ore veins are shown on (map).

Elven Smithing is the first perk in the Light Armor branch of the Smithing skill's perk tree. Unlocking it requires a Smithing skill of at least 30, and the Steel Smithing perk must have already been unlocked. Elven Smithing allows elven armor, elven gilded armor, and elven weapons to be crafted.

The Elven Smithing perk also causes tempering of elven weapons and armor (including elven gilded armor and elven light armor) to be twice as effective. This perk applies to both unenchanted elven gear and enchanted gear (generic armor, generic weapons, or custom), as long as the Arcane Blacksmith perk has been unlocked. Tempering of several other items is also improved by Elven Smithing, namely: Borvir's Dagger, Firiniel's End, Herebane's Courage, Herebane's Fortress, and Auriel's BowDG.

Elven armor is a medium-quality armor with several variants.

The Fearsome Fists Creation adds the Brawler's elven gauntlets, a new gauntlet variant. The base pair can be crafted and differ only in appearance, while a pair with a 12 point Fortify Unarmed enchantment can be bought from vendors and found in random loot. 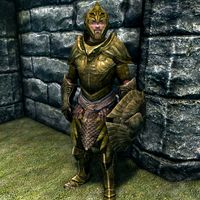 Elven Hunter armor is a variant added by the Alternative Armors - Elven Hunter creation. It can be crafted once the quest Once A HunterCC is completed.

The set lacks a helmet and shield, though the regular pieces can be used to get the matching set perk. The set pieces' stats are identical to the regular pieces, except for each piece having two more points in armor rating. As the gilded armor is still superior, it can be combined with the hunter boots and gauntlets, and the regular helmet and shield to get a total armor rating of 89. This combination exceeds the quality of scaled armor, while also remaining the lightest armor in the game. 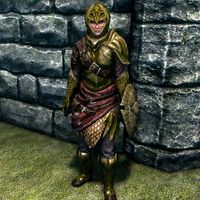 Elven weapons are medium-quality weapons that are better than the weapons associated with medium-quality heavy armor, (Dwarven and Orcish), but not as good as glass or ebony. They appear in leveled lists starting at level 19 (enchanted varieties at level 20). All items except ammunition can be tempered using one refined moonstone, and having the Elven Smithing perk doubles the quality improvement. Arrows can only be smithed if the Dawnguard add-on has been installed. Elven Crossbows are only available with the Elite Crossbows creation installed.

‡This item can only be crafted after completing the quest Night Hunter
¥The Enhanced Crossbow has an additional property: Attacks with this crossbow ignore 50% of armor.

† The base gold value used for all generic enchanted versions of the elven bow is 165 instead of 470. This means that the enchanted weapons are 305 gold cheaper than they should be, and in several cases are cheaper than the unenchanted bow. This bug is shared by several types of bow in the game.