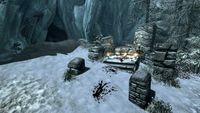 The Altar of Thrond is a landmark due west of the Temple of Miraak adjacent to a cave inhabited by hagravens. 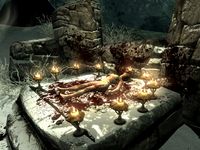 The normal approach to the altar is from the southwest. Two snowberry bushes and five blue mountain flowers are near and around the altar. There is blood splattered on the ground as you approach the altar, with a sacrifice lying dead upon the altar. 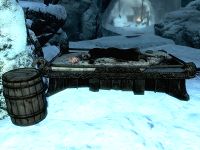 Upon entering the cave, you are in an ice tunnel heading north, with a set of bone chimes hanging from the ceiling in front of you, and more patches of blood on the ground. There are five more bone chimes along the tunnel. The tunnel turns to the east near a lit brazier on the ground on your left, then opens into a large cavern with three tall rock pillars. There are various ledges around the cave, and an altar in front of you with a dead alchemist laid out on top. Beside the alchemist is an apothecary's satchel and a piece of human flesh. Behind the altar is a barrel of meat, and farther behind is a campfire with a cooking pot sitting on a pile of rocks with another piece of human flesh beside it.

There is an earthen ramp to the left of the fire that rises to the east and then turns south to reach a tent. It is Isobel's, one of three hagravens living here. She is found standing in front of the tent, unless she has been alerted to your presence. Inside is a bed roll, an alchemy lab, and two apothecary's satchels on the ground to the right of the lab. To the right of the tent, along the southern wall of the cave is a moonstone ore vein. 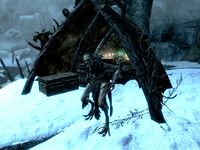 Heading north from the first tent, you will pass a barrel with a small coin purse and three loose coins on top and a pickaxe beside it. A second tent, Fallaise's, is next. Again, unless she has been alerted to your presence, she will be found just in front of her tent. Inside is an arcane enchanter, a food barrel, and an adept-locked chest. To the right of this tent is a silver ore vein, and behind the vein, in the northwest corner of the cave, is a quicksilver ore vein.

Following the path from the second tent to the east and then south, you will reach a third tent. This belongs to Ettiene, who is also standing in front of the tent unless she has been alerted. Inside is a bed roll and an unlocked chest. There is a quicksilver ore vein to the left of the tent when looking at the front of the tent. Heading due north from this tent to the northeast corner of the cave, you'll find a novice-locked chest in a small raised alcove.