Dark armor and weapons are the serpentine equipment used by the Dark Seducers. It was added to the game by the Saints & Seducers Creation.

Requires Daedric Smithing Perk. Dark Smithing is learned by reading Joften's Notes, located in a chest under the bridge at Half-Moon Mill. It is part of a miscellaneous quest first started by reading the Notes on the Blacksmith, a note kept by the Saints Bandit Leader. Learning Dark Smithing does not require the miscellaneous quest to be started however, as the chest containing Joften's Notes will be there regardless on if you are on the quest or not.

As it requires Daedric Smithing, Dark Smithing essentially requires a smithing skill of 90. Dark armor and weapons are relatively easy to get without the investment into the skill line, as their pieces can be found on all Seducers Bandits. Furthermore, as they on par with Glass equipment, they are quite useful to low levels characters as they are obtainable early on, assuming you can manage to take on the bandits that carry them.

All Dark items can be tempered using 1 Quicksilver Ingot. 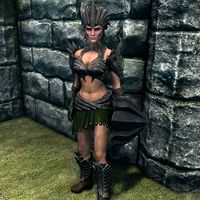 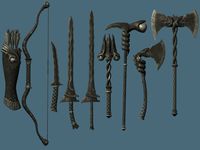 When compared to Glass, Dark weapons are about the same quality, but lighter.

This Skyrim-related article is a stub. You can help by expanding it.
Retrieved from "https://en.uesp.net/w/index.php?title=Skyrim:Dark&oldid=2683571"
Categories:
Hidden categories: