Daedric weapons and heavy armor are the best quality standard items available in the base game, with the Alternative Armors - Daedric Mail Creation adding a light armor variant. This page documents standard Daedric armor and weapons; the unique Daedric Artifacts obtained by completing Daedric Quests are documented on the Artifacts page.

Daedric items are made out of ebony, using identical materials to the equivalent ebony items in addition to a Daedra Heart. The heart imbues the items with the essence of the slain Daedra, as described in Heavy Armor Forging.

The Daedric Smithing perk also causes tempering of Daedric weapons and armor to be twice as effective. This perk applies to both unenchanted Daedric gear and enchanted gear (generic armor, generic weapons, or custom gear), as long as the Arcane Blacksmith perk has been unlocked. Tempering of several other items is also improved by Daedric Smithing, namely all Dragon Priest Masks and all Ancient Nord armor.

Obtaining a Daedra Heart is often the most difficult step in crafting Daedric gear; the Daedra Heart article provides full details on how they can be obtained.

Daedric weapons and armor can also be created at the Atronach Forge. Although using the Atronach Forge allows these items to be made without investing in multiple smithing perks, obtaining the necessary materials can be more difficult. In addition to the equivalent ebony item and a Daedra Heart, you need to supply a centurion dynamo core and a black soul gem — as well as having upgraded the forge with a sigil stone, which can only be done once your conjuration skill reaches 90. Also note that the Atronach Forge cannot be used to create Daedric Boots (the boots are bugged). However, the availability of all the ingredients still makes this a viable option for players not wishing to spend valuable skill points on the Daedric Smithing perk. The tempering bonuses, however, means that a player with the perk will see far greater benefits from the equipment.

Daedric Armor is the best heavy armor in the base game, only surpassed by Creation Club content, such as its daedric plate variant (described below) and Madness armor. It appears in leveled lists starting at level 48 (enchanted varieties at level 49). However, even after level 48, Daedric armor is twenty times less likely to appear than other armor types. All items can be tempered using 1 Ebony Ingot. 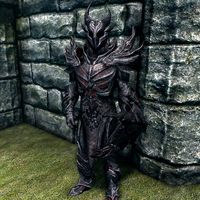 Daedric Plate is a heavy armor variant added by the Alternative Armors - Daedric Plate creation, consisting of a cuirass and helmet. Both pieces can be bought or made with the Daedric Smithing perk.[verification needed — vendors only? at which level?]

The cuirass is slightly weaker than Madness armor, while the helmet is slightly stronger. However both pieces are lighter.

Daedric mail is a light armor variant added by the Alternative Armors - Daedric Mail creation. A set can be obtained by completing Missing MerchantCC, in addition to being able to craft it.

It's superior to any other light armor piece in the game, though it lacks both a helmet and shield. However, when wearing all three pieces of daedric mail armor, you will gain the benefits of the Custom Fit, Matching Set (light armor version), Wind Walker, and Deft Movement perks, despite normally needing a helmet. Wearing a heavy daedric helmet will also count as a light armor matching set, though any other combination of daedric and daedric mail armor will only benefit from the heavy armor Matching Set perk. Using any other light armor helmet will prevent the matching set perk bonus. 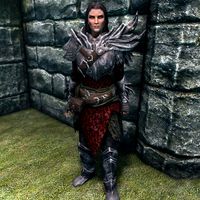 Daedric weapons are the best standard weapons available in the original release of the game. The Dawnguard add-on introduces Dragonbone weapons, which exceed Daedric in quality. They appear in leveled lists starting at level 46 (enchanted varieties at level 47). However, even after level 46, Daedric weapons are twenty times less likely to appear than other weapon types. All items except ammunition can be tempered using 1 ebony ingot. Arrows can only be created if the Dawnguard add-on has been installed. Daedric Crossbows are only available with the Expanded Crossbow Pack creation installed.

† The base gold value used for all generic enchanted versions of the Daedric Bow is 875 instead of 2500. This means that the enchanted weapons are 1625 gold cheaper than they should be, and in several cases are cheaper than the unenchanted bow. This bug is shared by several types of bow in the game.