The UESPWiki – Your source for The Elder Scrolls since 1995
< Skyrim: Items / Armor / Weapons
Jump to: navigation, search

Nordic armor and weapons can be crafted with the Advanced Armors perk. All items, except arrows, can be tempered with a quicksilver ingot.

The Nordic Jewelry Creation adds jewelry items in the same style, which can be crafted after completing the related quest. See this page for the full list.

Nordic carved armor is medium-quality heavy armor. The cuirass is comparable to ebony armor in strength but the boots, gauntlets and helmet are only of Orcish quality. The Nordic Shield is comparatively weak, being only slightly stronger than its Dwarven counterpart. A full set of Nordic carved armor (shield excluded) will offer slightly better protection than Orcish armor but weigh more, whereas including the shield makes it weaker than a full set of Orcish armor, but slightly lighter. 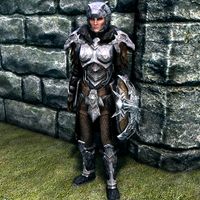 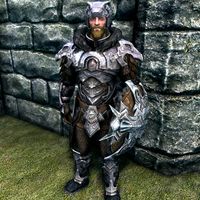 Nordic weapons are of Elven strength, but slightly lighter. Nordic Crossbows are only available with the Expanded Crossbow Pack creation installed.