The UESPWiki – Your source for The Elder Scrolls since 1995
< Skyrim: Spell Knight Armor
Jump to: navigation, search

Three sets of heavy Spell Knight Armor variants are added to the game by the Spell Knight Armor Creation (themed after the Order of the Crypt, a Bretonic knightly order). One set of the iron and steel variants can be obtained through the related quest, and after completion all three sets can be crafted at a forge. While each set are of high quality for their material, no set contains a shield.

The iron variant is the weakest of the three in terms of base stats. All pieces have the same weight as regular iron armor. However, the cuirass' armor rating is slightly higher than banded iron armor. The other pieces are more impressive on that regard, tying with steel plate armor. No Smithing perks are needed to craft these, though that means they also do not benefit from any possible temper bonus. All items can be tempered using 1 Iron Ingot. 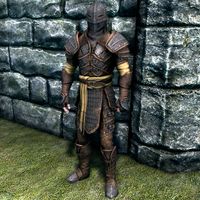 In second place is the steel variant, that shares its weight with the regular steel armor. The cuirass is on par with improved bonemold armor in terms of armor rating, while the other pieces tie with ebony armor. They require the Steel Smithing perk to craft, as well as getting double the effectiveness when tempering them, requiring a steel ingot for each piece. 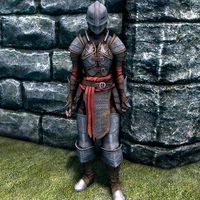 The ebony variant is the strongest of the three, sharing its weight with the regular ebony armor. The cuirass is slightly better than the dragonplate armor in terms of armor rating, while the other pieces are even stronger than daedric and madness armor. They require the Ebony Smithing perk to craft, as well as getting double the effectiveness when tempering them, requiring an ebony ingot for each piece. 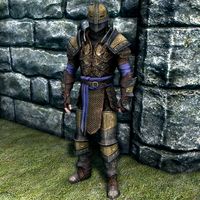