The UESPWiki – Your source for The Elder Scrolls since 1995
< Skyrim: Items / Armor / Weapons
Jump to: navigation, search 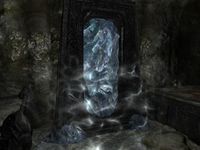 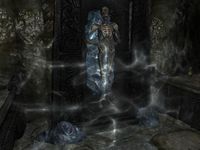 Stalhrim is an ancient Nordic enchanted ice that can be used as a crafting material. Once you have obtained the Ebony Smithing perk and completed the quest A New Source of Stalhrim, you can craft stalhrim armor and weapons. All items, except arrows, can be tempered with a sample of stalhrim. Stalhrim heavy armor is equal in quality to dragonplate armor, but lighter. Stalhrim light armor exceeds the quality of glass armor, but is weaker than dragonscale armor (with the exception of the shield). Stalhrim weapons do the same amount of damage as ebony weapons, and weigh less. Resist frost and frost damage enchantments are 25% stronger when placed on stalhrim items. Chaos damage enchantments are also 25% stronger, due to its frost damage effect. Lastly, Stalhrim weapons have higher stagger values (by 0.1) than weapons made of other materials, except daggers, bows, and arrows. In relative terms, this means Stalhrim swords and greatswords receive the greatest benefit within their respective weapon categories, as they start out with the least stagger.

All stalhrim armor and weapons can be found in leveled lists starting at level 35. Stalhrim will respawn with the rest of their location after a certain period of time.

There are no random locations for Stalhrim. However:

There are a total of 19 deposits located on Solstheim: 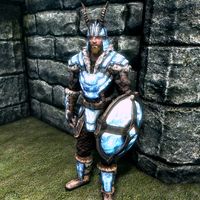 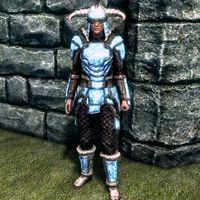 The Alternative Armors - Stalhrim Fur creation adds another variant of heavy Stalhrim armor based on the style of Blades. It can be crafted after the completion of Ancient IceCC (as well as A New Source of Stalhrim), and is identical to the regular heavy variant apart from each piece having an additional 2 points of armor rating. This makes the set slightly stronger than daedric armor, while being considerably lighter. 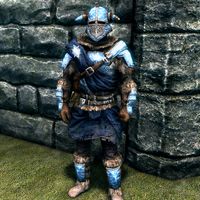 ^1This issue has been addressed by the Unofficial Skyrim Patch; it changes the speed to 0.75.
^2The speed of a bow does not work like the speed of a melee weapon; see the Archery article for details.
^3While bows have a reach value, it is not used for anything - see the Archery article for details on determining the range of an arrow shot from a bow, and bash distance is independent of the weapon wielded.
^4While arrows have a speed value, this determines how quickly they travel, not the time between shots.

One achievement is unlocked when you craft an item from stalhrim: