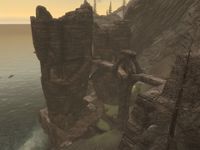 There are two entrances to the mine, one found to the north of Raven Rock and one inside Raven Rock Mine. The main interior portion of Bloodskal Barrow can be entered from outside, although there is a tiny, separate room with a stalhrim deposit which can only be accessed via Raven Rock Mine; the door is hidden behind a waterfall. There is little of note in the room except for a stalhrim deposit flanked by two large urns.

At least four reavers are stationed outside in the ruined towers. When exiting from inside the barrow there is a ledge with a walkway guarded by a reaver linking it to one of two ruined towers opposite. At the other end of the walkway there is a wooden ramp leading down to the left and a doorway ahead to a room containing a wooden table and chairs holding a portion of grilled leeks and a salmon steak, along with a rare knife and two forks usable as weapons. There is also a set of shelves against the southwest wall holding a chitin helmet, a pair of chitin boots, two ash yams and an ash creep cluster, with a woodcutter's axe to the left by a large pile of firewood. Against the southeast wall is a flight of stairs leading up with a cooking pot on a stand underneath beside a fish barrel.

Climbing the stairs leads to another room with an alchemy lab in the western corner. To the northeast are three tanning racks with a table and chair between two of them holding a Dunmer outfit and another fork weapon. Against the southeast wall is a set of shelves holding two horker tusks, a horse hide, two bottles of sujamma and a few books including a copy of Trap and The Tale of Dro'Zira. Against the northwest wall is another flight of stairs up with two barrels containing ingredients underneath. These stairs lead to a bridge across to the top floor in the other tower.

There are stairs leading down from the bridge to the top floor, which contains an adept locked chest opposite the stairs with a single bed beside it and a food barrel at the foot of the bed. Against the southeast wall is a wooden table with a Scroll of Chain Lightning, and a scrawled note on top. There is no other exit from this room apart from by backtracking to the ramp leading down from the walkway.

At the bottom of the ramp is a doorway into the tower with a narrow table opposite holding two random healing potions. On the right is a flight of stone stairs down with an unlocked chest beside them at the bottom, a doorway outside with another single bed opposite. Outside there is a stone bridge to the other tower with a doorway ahead and a wooden ramp up on the right. At the top of this ramp is a room containing a reaver sleeping on a bed roll, two other bed rolls and a pair of random boots on a crate. Again there is alternative exit.

The doorway at the end of the stone bridge leads to a flight of stairs down to the ground and an exit. This is where at least two more reavers can be found. To the west of the towers is a nirnroot, while around the towers there are several other plants that can be harvested for Ingredients unique to Solstheim.

Typically this barrow will be initially entered via Raven Rock Mine, which is connected via a twisting tunnel that leads to a concealed door opened using a chain to the left. Upon entering from the mine there is a stool on the left with a copy of The Holds of Skyrim on top and two loose septims on the ground next to it. Unless you are sneaking it is likely you will encounter a reaver and reaver boss at this point. This like other Nordic barrows have two rows of alcoves along the walls to inter the dead, unlike other barrows these are empty except for the occasional skeleton, none of which can be looted. In the southern corner is a wood chopping block, while along the southwest wall are five whole salmon hanging from a rope strung against the wall with a garlic braid, a bunch of dried elves ear and a bunch of dried frost mirriam hanging above. Behind in an alcove are two baskets containing six leeks and eleven ash yams. To the right in another alcove and on the ground are several bottles of alto wine and wine among several empty wine bottles. While in the western corner is a table with an alchemy lab on top.

To the northeast of the food is a campfire with a cooking pot hanging over it, with a round wooden table and chairs holding an ash yam and a piece of boar meat to the northeast of that. Beside the table is an open crate containing six more ash yams and to the north is an area that has been converted into a bedroom space used by the reaver boss containing a large double bed coming out from the northeast wall with a dresser to the left holding a copy of Deathbrand. To the left of this is an unlocked boss-level chest. Opposite the foot of the bed are two sets of shelves holding several sets of clothes, three common books, a copy of The Red Book of Riddles, a deer hide, a medium coin purse, four loose septims, and a couple of food sacks. By a large pillar to the left is a bookcase holding eleven books common on Solstheim, including another copy of Deathbrand and a medium coin purse.

To the northwest of the campfire the path rises, at the top there is a fire on the right fueled by the missing dead draugr from the alcoves with more on the ground and in a cart beside it. To the left the path turns back to the northwest and then again to the northeast. Here the exit is on the left, while ahead there are the bodies of a High Elf and an Imperial, both of which hold little but the clothes on their backs.