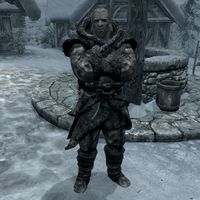 Deor Woodcutter is a Nord living in Skaal Village. He lives with his wife, Yrsa, in their house.

At first, he will be found mindlessly working on the Wind Stone twenty-four hours a day. After The Fate of the Skaal, he will return to the village. He'll then get up at 8am, to go outside and work around the village for twelve hours. At 8pm, he'll head back to his house and relax for four hours. Then, at midnight, he'll head to his bed and go to sleep.

He wears a Skaal coat with matching boots and gloves. He carries an iron war axe, his house key, and a selection of common items and gold.

A New Source of Stalhrim[edit] 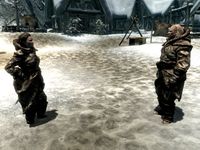 If you return to Skaal Village after the quest The Fate Of The Skaal, you will overhear a conversation between Fanari and Deor:

Fanari: "Don't worry yourself over nothing, Deor. Do you want a head full of gray hairs before you've seen forty winters?"
Deor: "Something isn't right, Fanari. I feel it in my bones and I smell it in the air. Baldor wouldn't leave without telling someone."
Fanari: "Deor, you must be calm. I'm sure there's a good reason Baldor left us."
Deor: "It makes my heart heavy that you don't believe me, Fanari. Baldor could be in danger, and you will do nothing. If you won't help me, then I'll ask the All-Maker to send someone else who can."

When you approach him, he'll say:

"I am in no mood to talk, outsider. One of the Skaal has gone missing."
Who's missing?
"It is Baldor Iron-Shaper. As our only smith, Baldor is very important to the village."
Did anything unusual happen around the time of his disappearance?
"Hm, I do not remember Baldor acting strangely. Although, now that you ask, I did see something in the woods on the day he disappeared. I saw two elves in the far distance, dragging something behind them. Hunters often visit our lands, so I thought little of it."
Where were they headed?
"South and west. If your road takes you that way, perhaps you could search for any sign of Baldor. The Skaal would be grateful."

You can also ask why someone would kidnap Baldor:

Why would someone want to kidnap Baldor?
"Well, there is one reason that comes to mind. Baldor is the keeper of an ancient tradition, the forging of Stalhrim. It is an art we Skaal hold sacred. If someone wanted to make such weapons, they would have to get that knowledge from Baldor."

If you greet him after you complete the quest, he may say:

"It's good to see you again, Skaal-friend. By saving Baldor, you helped to preserve our sacred traditions."

During The Gardener of Men, when he sees what Storn is doing, he'll ask:

After Storn's death, he'll only say:

"These are dark times. How will we get through them without Storn to guide us?"
"Leave us now."

When he walks up to Storn's dead body, he'll say:

When you free him from the Wind Stone, he'll say:

"Thank you, my friend. You have set us free."

When conversed during his walk back to the village, he'll say:

"A fever must have taken me. What else could explain this?"
"I don't mean to be rude outsider, but I must get back to the village."

Back at the village when approached he can say:

"Whatever you and Tharstan found in the old tomb, he is very excited about it."

Deor may have some random conversations with his wife or Wulf Wild-Blood:
Deor: "There was a great brown bear on the slopes the other day. I could swear by the All-Maker that it was watching the village."
Wulf: "Yes, I know the one you saw. It watches us each night, always moving closer. As the ashfall worsens, the land and water are poisoned. The animals have less to eat and become desperate."
Deor: "We had better do something about it, then."
Wulf: "It makes my heart heavy, to think of killing a beast when we have no need of its hide or its meat. That is not our way. The bear might find food elsewhere. We will leave it alone."

Deor: "I have seen more wolves and bears among the trees since the last dark moon. Something is driving them north into our lands."
Wulf: "The beasts are driven north in search of food. The ashfall in the south kills the plants upon which the small creatures feed. As the small creatures move north, the large ones that prey upon them must follow."
Deor: "If they grow hungry enough, they will turn upon us."
Wulf: "That is the way of things. We must be prepared. At least the hunting will be easier with the beasts so close."

Deor: "I'm in your debt, Wulf. That bow you gave me is twice as strong as the last one I had."
Wulf: "It's not just the bow, Deor. Your arm has grown strong and your eye sharp. You've spent many days practicing your aim. The All-Maker favors those who work hard to hone their skills, as you have done."
Deor: "Then I will keep practicing my aim every day."

Wulf: "Make sure that you save some wood from the pile."
Deor: "What for?"
Wulf: "One of our chairs is about to break. It will need to be mended with a new leg."
Deor: "Very well, I'll take a look at it later."

Yrsa: "Husband, do you know why there's a pouch of spiced tea leaves under the bed?"
Deor: "What?! That was supposed to be a gift! I was hoping to surprise you."
Yrsa: "That is sweet of you, Deor, but you should find a better hiding place next time."
Deor: "If I'd known that I was married to a fox who digs under beds to look for treats, then perhaps I would have."