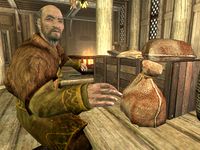 Tharstan packing for the trip

The small settlement of Skaal Village is inhabited by Nords living life the old way, with their own culture and religion, especially the worship of the All-Maker. These welcoming and hospitable people let an elderly historian and author named Tharstan live in the village so he could study and document the ancient Skaal traditions. Using what he learned of Skaal culture, Tharstan wrote Children of the All-Maker, and the next book is nearly finished. He also married the Skaal leader Fanari Strong-Voice and now lives in the largest building in town, the Greathall. After your heroic rescue of Baldor Iron-Shaper during the quest A New Source of Stalhrim, Tharstan will decide that you are the right person for a task he has in mind, and will actively seek you out when you next visit the village.

As it turns out, Tharstan is not only interested in Skaal traditions, but is equally interested in the many ancient ruins scattered all over Solstheim, claiming to know most of them well enough to draw a detailed map from memory. However, his recent discovery has left him quite nervous about exploring by himself, so he wants you to accompany him as backup. According to Tharstan, a new passage was unveiled during an earthquake caused by the eruption of Red Mountain. The passage revealed the entrance to Vahlok's Tomb. When you agree to go with him, Tharstan will run off to his temporary home, the Greathall, to pack for the trip, hoping you will meet him there as soon as possible. 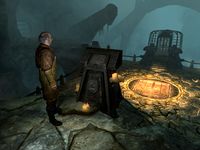 "A sacrifice will bring you closer to that which you seek."

Vahlok's Tomb is located south-southeast from Thirsk Mead Hall, directly east from Kagrumez. Be sure to stock up on potions and have your best weapons on hand, then take the trip to the tomb. You will find the entrance located at the end of the passage caused by the earthquake. Head down the first tunnel and you will find Tharstan waiting for you. His fascination with the tomb is immediately apparent: "Remarkable, isn't it? This tomb has been hidden for... well, who knows how long. Many centuries, I would think." He will then proceed to offer you the first task: "There are some sealed doors up ahead. Perhaps you can figure out how to get them open." He will then guide you down a set of stairs and keep talking: "I've had a look around and the only interesting thing I've found is this inscription here, and a switch below it." When he arrives at the inscription and the switch he will continue: "Now, I'm not sure if you can read the dragon language, but this seems to be a riddle of some sort. 'A sacrifice will bring you closer to that which you seek.' I wonder what it means."

When you examine the room it soon becomes clear what needs to be done: dead draugr are scattered all around a gigantic burning hole in the floor, with only a grate to keep you from falling down. As per Tharstan's hint, drag (by holding down the "Activate" button) one of the dead draugr onto the grate, then head back up on the podium and activate the handle underneath the inscription. This causes the grate to open and drop the draugr into the flames, acting as the sacrifice needed. While the draugr burns, two entrances in the room will open, one to the north and one to the south.

With the two parts of the Amethyst Claw in hand, it is time to unlock the odd cage in the central chamber. Insert the corresponding claws in the keyholes on each side of the stairs leading to the cage. When the cage opens, your elderly sidekick will jump into the cage and translate the plaque: "Here's another riddle. 'Stay your course. To idle is to die.' Well, at least it's straightforward. There appears to be a switch of some kind here. I'll just stand over here while you flip that switch. I'm sure everything will be fine." Flip the switch, and several magical platforms will start to emerge and disappear all over the watery area in the chamber, leading to an entrance far away. You will have to follow the platforms while they are present and be on the next platform before the former disappears. When you make it to the other side, the magical platforms will turn into a bridge and Tharstan will be able to join you. 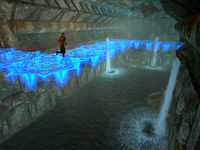 "I'm glad these platforms appear once you finish them."

Head through the corridor and face the next challenge: a gigantic chamber flooded with water and several corrupted shades lurking below. The drop is a very long one, but luckily a handle is present to create more magical bridges. Activate the handle and follow the bridge as it appears and disappears, landing you on a small alcove. Once again, the platforms will become permanent once you traversed them once, so Tharstan will soon follow, commenting on everything. Yet another magical bridge awaits, and its platforms disappear even faster than before. The last bridge leads to a huge iron door to the north. If you fall down you will not only suffer damage from the fall, but will have to deal with the corrupted shades and locate one of the various shortcuts back to the bridges above.

After the last bridge, Tharstan will open the gate leading to the ruins' Hall of Stories, excited as always: "Ah, the Hall of Stories. These are found in many ancient Nord tombs. There must be hundreds of years of history etched in these walls. Too bad they seem to be too damaged to read." He will then consider the puzzle door: "Hmm...looks like it needs some sort of key. Maybe those half claws you found would fit in here if you put them together?" Naturally, he is correct, but the right combination is nowhere to be seen on the claw, so you will have to pay attention to Tharstan as he deciphers the writings on the walls: "Perhaps there's enough undamaged text in these etchings to tell us the combination. Ah, yes, here's something. The first one has to do with a breeze, or maybe it's wind. The second one mentions the the [sic] night sky, and the moon. And the third has something to do with fire. It also seems to mention scales." He will then ask you to figure out the combination from these small tips. Turn the rings on the door to Eagle—Wolf—Dragon and insert the amethyst claw in the keyhole. 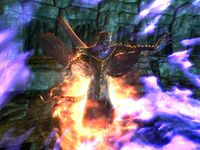 The puzzle door will lower to reveal a long staircase leading up to a chain that opens the way to the final chamber. The chamber itself is essentially one big trap, as almost all the tiles on the floor are flame spout traps. Fire resistance will be extremely useful in this chamber, so make sure you prepare before entering. You will not make it far into the room before the legendary dragon priest Vahlok the Jailor bursts out of his sarcophagus and starts to throw high-level fire spells at you, so do your best to fight him and avoid the fire.

After the battle, old Tharstan will once again come out of hiding and start studying the word wall: "Hmm, here's another mention of the guardian. I can only assume that this is the guardian's tomb we are standing in now. It says that he was loyal, and his reward was an honorable death. Quite fascinating." Speak to Tharstan and he will further comment: "How amazing! A real Dragon Priest! In all my years as a historian, I never thought I'd see anything like that. I suppose that was Vahlok. He must have had this entire place built for him so that he could maintain his vigil, even beyond death." He will then reward you with 1000 gold and tell you that he will stay in the tomb a while longer, for further studying. Before leaving, make sure to loot the remains of Vahlok for a hefty amount of gold and search his boss-leveled chest. Learn the third and final word for the Battle Fury shout, then backtrack all the way to the entrance.