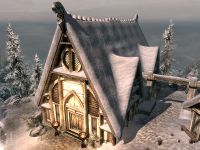 Greathall is the home of Fanari Strong-Voice, the chief of Skaal Village.

The Greathall is the tallest house in Skaal Village. It is in the central square of the village, to the left of the shaman's hut. There are two entrances, one on the east side and one on the west side. Outside of the western entrance are two lit braziers, one on each side of the door. To the left is a blue mountain flower. 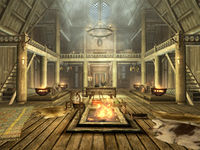 Hall of the Great

You enter into a large hall with balconies around the western half of the room. Stairs are against the northern and southern walls. There is a large fire pit in the center of the room with a cooking pot on the southern side. Around the fire pit are three pieces of firewood, a pot of honey, a stand containing three fillets of horker meat, an open crate containing a cabbage and a bottle of alto wine and a cast iron pot, which contains two potatoes, next to a chair.

Against the eastern wall is an open display cabinet containing two horker tusks and a rock warbler egg. In front of this, next to a pillar, is a basket containing three wheat samples. To the right of the display cabinet, in the southeast corner, is a crate. Against the southern wall between the crate and stairs is a set of shelves containing an eidar cheese wheel, a goat cheese wheel, a sliced goat cheese, an ash yam, a sack and a salt pile. Under the southern stairs are two crates, a mead barrel, three sacks and a chair. In front of this are two lit braziers with a pile of firewood and a woodcutter's axe. To the right of the lit braziers, hanging under the balcony, are two salmon, a pheasant, frost mirriam and elves ear. Also against the southern wall is a barrel with a deer hide beside it. 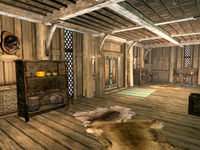 In the back door

In the southwest corner, against the western wall is a set of shelves containing a knapsack, three leather strips, two bottles of alto wine and a goat cheese wheel. There is a second entrance in the middle of this wall. Further to the right is a small set of shelves containing two potatoes, a goat hide, a snow fox pelt and a metal bowl, which contains three gold ore samples. In the northwestern corner is an open display case containing two animal skulls.

Against the northern wall is a desk with copies of Deathbrand, Vernaccus and Bourlor, Children of the All-Maker, Fall of the Snow Prince, Ghosts in the Storm, Last King of the Ayleids, The Guardian and the Traitor, The Song of Pelinal, v3, The Real Barenziah, v3, Ahzidal's Descent, a roll of paper, a small coin purse and two bottles, one of alto wine and the other wine.

To the right of the desk is an end table. Further to the right, under the northern stairs, are two barrels, a crate and a sack. In front of these are two more lit braziers with a crate and three sacks in between. To the left of the lit braziers, hanging under the balcony, are two samples of elves ear, a garlic braid, a rabbit and a pheasant. Still against the northern wall, between the stairs and the corner, is a small wooden table and two chairs. On the table is a wooden plate holding a salmon steak. In the northeast corner is a set of shelves containing a deer pelt, an empty bottle of wine, a leather strip and an open crate containing three pieces of leather. To the right of this is a barrel with a large piece of charcoal on the ground beside it. Next to a pillar in front of the western entrance is a crate, with a basket containing five large pieces of charcoal in, and two more around, it. Towards the middle of the room between both sets of lit braziers is a long table with benches either side, on the table is a mead barrel and a cast iron pot containing a salmon steak and some grilled leeks. 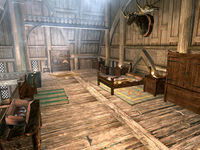 Climbing the northern stairs you come to the sleeping area for Fanari Strong-Voice. In front of you, in the northwest corner, is a barrel and a long end table with a horker tusk and sack. A crate and second sack is in front. To the left of the end table is a wardrobe, followed by a small end table with a sample of frost mirriam on top. To the left of this is a double bed and then another end table with a satchel on top. Under the left-hand side of the bed is a pair of boots. Further to the left is an unlocked empty chest. In the southwestern corner is a dresser with a Sabre Cat snow pelt. There is a set of shelves against the southern wall that contain two sacks. At the front of the balcony from left to right is a dresser with an apprentice locked display cabinet atop. Inside the cabinet are three pearls and three small pearls. Next is a bench and finally a crate with a set of clothes on it.