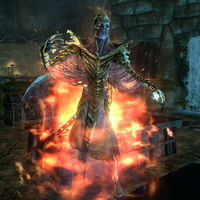 Vahlok the Jailor is a dragon priest entombed within Vahlok's Tomb in Solstheim. He was once the ruler of Solstheim, tasked with watching over the traitor, Miraak, after discovering Miraak's plot against their masters and defeating him in an epic battle.

This Skyrim-related article is a stub. You can help by expanding it.
Retrieved from "https://en.uesp.net/w/index.php?title=Skyrim:Vahlok_the_Jailor&oldid=2137905"
Categories:
Hidden categories: