The UESPWiki – Your source for The Elder Scrolls since 1995
< Skyrim: Items: Miscellaneous Items / Mining
Jump to: navigation, search 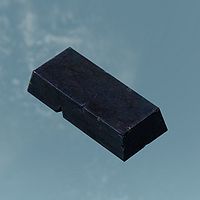 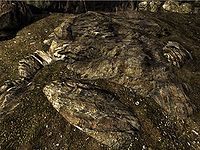 These ore vein locations are also listed in the Ebony Veins category, and the exterior ore veins are shown on (map).

Ebony Smithing is the third perk in the heavy armor branch of the Smithing skill's perk tree. Unlocking it requires a minimum Smithing skill of 80, and the Orcish Smithing perk must have already been unlocked. It allows both ebony armor and ebony weapons to be crafted.

The Ebony Smithing perk also causes tempering of ebony weapons and armor to be twice as effective. This perk applies to both unenchanted ebony gear and enchanted gear (generic armor, generic weapons, or custom), as long as the Arcane Blacksmith perk has been unlocked. Tempering of the Savior's Hide is also improved by Ebony Smithing, even though it does not use an ebony ingot.

With the addition of the Dragonborn add-on, Ebony Smithing is required in order to craft stalhrim weapons and armor.

Ebony armor is the high-quality heavy armor. It appears in leveled lists starting at level 32 (enchanted varieties at level 33). All items can be tempered using one ebony ingot, and having the Ebony Smithing perk doubles the quality improvement.

The Fearsome Fists Creation adds the Brawler's ebony gauntlets, a new gauntlet variant. The base pair can be crafted and differ only in appearance, while a pair with a 16 point Fortify Unarmed enchantment can be bought from vendors and found in random loot. 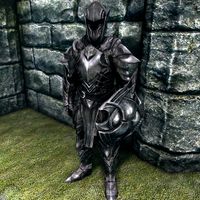 Ebony Plate is a variant added by the Alternative Armors - Ebony Plate creation. It can be crafted after completing Heart of CrimsonCC, while also appearing in random loot. 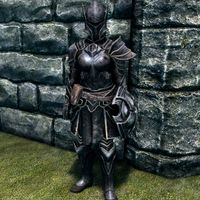 Ebony weapons are generally the second-best standard weapons in the original version of the game, behind only Daedric weapons. However, the ebony mace and ebony war axe are actually slightly better than their Daedric equivalents. These two weapons have identical damage statistics to the Daedric versions, but weigh less and do not require the use of a valuable Daedra Heart to create, making them somewhat better overall, something changed by the Unofficial Skyrim Patch. The Dawnguard add-on introduces dragonbone weapons, making ebony the third-best standard of weapon.

Ebony weapons appear in leveled lists starting at level 36 (enchanted varieties at level 37). All items except ammunition can be tempered using one ebony ingot, and having the Ebony Smithing perk doubles the quality improvement. Arrows can only be smithed if the Dawnguard add-on has been installed. Ebony Crossbows are only available with the Elite Crossbows creation installed.

The Ghosts of the Tribunal Creation adds two new ebony weapons which can be crafted once you've killed the heretic during the related quest.

†In earlier versions of the game, the speed of an ebony dagger is 1 instead of 1.3. This bug also applies to all generic enchanted ebony daggers.
‡The Ebony War Axe has an incorrect damage value of 15, the same as Daedric War Axe. It should be 14.
††The Ebony Mace has an incorrect damage of 16 when it should be 15. Also, critical damage is 8 when it should be 7.
‡‡This item can only be crafted after completing the quest Night Hunter
¥The Enhanced Crossbow has an additional property: Attacks with this crossbow ignore 50% of armor.