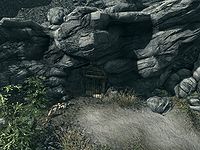 Northwind Mine is a small iron mine on the northern side of Northwind Summit.

To find the mine, start from Shor's Stone and follow the path north out of the settlement. After passing Shor's Watchtower on the right, a set of steps will be seen on the left. Follow the path up the steps to the entrance of the mine.

The mine has two access points, one south and one up the mountain to the north. It is inhabited by skeletons. If you are entering from the bottom, southern end of the mine, you will find a very steep incline going down into the mine. At the bottom are some skeletal remains, an abandoned handcart filled with rocks, and an iron ore vein. The mine shaft climbs upward again into the main chamber. Here two skeletons are patrolling on the wooden scaffolding. Up the ramp just inside the entrance, to the left, is an unlocked chest under the supports. To the right, just within the lantern glow, is a knapsack. The table on the east wall, at the base of the second ramp, holds a copy of the Block skill book The Death Blow of Abernanit. Between the two ramps, against the west wall is a second iron ore vein. Head up the second ramp and through a narrow passage to the top of the mine. Just before the passage widens, notice a tripwire that triggers a falling boulder trap. It is easy to disarm from this side, however, as the rocks fall into the room rather than down the passage. The last skeleton is patrolling in this area. Another iron ore vein is on the west wall, illuminated by lantern light. The passage narrows once more and turns east leading out to Northwind Summit.