The entrance to Redbelly Mine

Redbelly Mine is a small mine in Shor's Stone with three ebony veins inside, and a smelter near the entrance. The villagers describe it as the life blood of their town. It gets its name from the red mist that flows freely throughout the mine. The mist's smell is described as being similar to the sulfur vents located in the volcanic tundra. 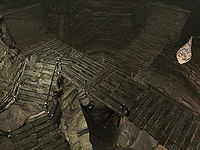 The local blacksmith, Filnjar, will request your aid in clearing the mine of a large group of frostbite spiders. The creatures recently took up residence in the mine after the discovery of some unusual ore. The miners will return to work once it's been fully cleared. The mine entrance is located immediately west of Filnjar's House. 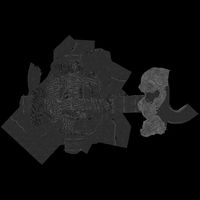 Map of Redbelly Mine
Retrieved from "https://en.uesp.net/w/index.php?title=Skyrim:Redbelly_Mine&oldid=2215248"
Categories: