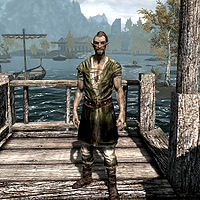 Valindor on the back porch of Honeyside

Valindor is a Wood Elf warrior who was born in Valenwood. He spent most of his childhood playing in the towering trees that grow there with his brethren. He became the apprentice of a master armorer in Silvenar and was later urged by his master to take over his business; however, he turned it down and decided to wander Tamriel instead. Now living in Riften and working at Riften Fishery, he almost regrets his decision to leave home.

Valindor wears a set of farm clothes along with a pair of boots. He carries the key to his house, a leveled potion, and a selection of common items and gold. He wields a leveled dagger in combat, which can be up to elven in quality.

Valindor will greet you pleasantly, however he informs you that the fishery is not hiring: "Well met. I don't think they're hiring anyone at the moment, so if you're looking for work, you're out of luck." He will then change the subject and comment on the local scenery: "The trees... they're beautiful here. Reminds me of autumn at home." He then discusses his life when he was back at his home, stating, "The fall forest makes me miss my childhood; playing among the towering trees in Valenwood and living with my brethren." With the happy memories of Valenwood fresh in his mind, he makes a bitter comment about his current location: "Seeing the sorry state of this city almost makes me regret my decision to leave my home when my apprenticeship completed." He then tells you about the apprenticeship, saying, "I was fortunate enough to be guided by one of Silvenar's master armorers until he passed." He will then elaborate on his master's death: "On his deathbed, my master urged me to take over his business but I decided against it. I chose to wander Tamriel instead." He seems to regret that decision, as he states, "Now here I am, working for this dreary city's Fishery. I sometimes wonder why I don't just move on."

During the quest Spread the Love, you may hand him a pamphlet, and he will react pleased: "Seems like a noble cause, I'll look it over."

Should you join the Volkihar vampiresDG, Vingalmo will eventually give you a quest to turn one of three targets into a vampire. Valindor is one of these three potential targets for this quest. When describing your target, Vingalmo will say "Valindor of Riften has his ears in places that we'd love to listening in. Joining our family should increase our possibilities in the south." After being turned into a vampire, Valindor will thank you "You've given me a great gift friend. The night air hums and the shadows are full of color." and will also tell you, "Make use of my coffin whenever you like. My home is your home." While he is happy with his gift, he will point out that his new lifestyle comes with much danger: "We are blood bound, but we can never be too careful. Never know who might be watching, right?"

Valindor can often be seen engaging in conversations with other Riften locals while he is at the bunkhouse.

Svana: "How do you do it, Valindor? How do you work at Black-Briar Meadery and the Fishery without getting exhausted?"
Valindor: "Oh, it's not so terrible. I actually find the work quite relaxing."
Svana: "Relaxing? They must be working you to the bone! You should rest before you do yourself in."
Valindor: "Not to worry, dear Svana. I promise you I can handle it, but your concern is quite flattering."

Valindor: "Wujeeta, you really need to stop using that skooma. It's very bad for your health and I wouldn't want to see anything happen to you."
Wujeeta: "I can't, Valindor. It won't let me go. It's taking over my life."
Valindor: "It's an evil substance. Whoever's selling it to you should be brought to justice."
Wujeeta: "If there was any justice in the world, I'd just get this over with and die peacefully."

This Skyrim-related article is a stub. You can help by expanding it.
Retrieved from "https://en.uesp.net/w/index.php?title=Skyrim:Valindor&oldid=2481922"
Categories:
Hidden categories: