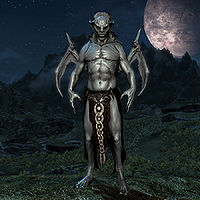 Vampire Lord is a lesser power added by the Dawnguard add-on that allows players with vampirism to turn into a powerful Vampire Lord: a large humanoid creature with sharp claws and bat-like wings. In order to gain this ability, you must accept Lord Harkon's gift during the Bloodline quest or receive it from Serana after Chasing Echoes. She also offers the option to infect you after completing Destroying the Dawnguard or Kindred Judgment. The ability can be used an unlimited number of times per day and at any point during normal gameplay. While not in Vampire Lord form, you will still have all the characteristics of a normal vampire.

As a Vampire Lord, you will be able to use blood magic and other dark powers, and can either levitate and use spells or remain on the ground and fight with deadly claws. In Skyrim, only the more pure-blooded vampires such as those of Lord Harkon's court have this ability and, according to him, the family's vampirism was a gift directly from Molag Bal himself.

Accepting Harkon's gift will permanently align you with the Volkihar; the only way to become a Vampire Lord and side with the Dawnguard is to wait for the option to be infected by Serana.

The Vampire Lord power has the following effects: 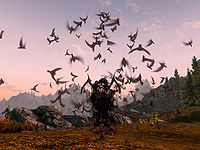 While you are in Vampire Lord form, only the Amulet of Bats, Amulet of The Gargoyle, Ring of The Beast, or Ring of the Erudite can be used; all of your other equipment is removed automatically. You also will not be able to use your normal spells, dragon shouts, or powers, but your attacks increase in power and speed. You will move more quickly as well, but since the "Vampire Claws" constant effect gives you the waterwalking ability, you cannot swim as a Vampire Lord. Once you transform, all summoned creatures (including dead thralls) will immediately die. Your racial abilities do not carry over into Vampire Lord form, but existing spell effects do. This includes passive abilities such as The Lord Stone, the Blessing of Mara, and the Magic Resistance perks from the Alteration skill tree. It also includes the Destruction Cloak spells and the Alteration Flesh spells.

Vampire Lords are dangerous, fearsome creatures, and you will be attacked on sight if you are seen in this form. However, since NPCs will not recognize you, crimes committed in Vampire Lord form will not be attributed to you and will not increase your bounty. If you are seen transforming, 1000 gold will be added to your bounty.

The world was not built for Vampire Lords, so you may get stuck in some small doorways while in this form. To avoid this, try turning sideways so that your wings go through the doorway first. In most cases, you can get through. When all else fails, the Bats ability will get you out of tight jams fairly well.

While in Vampire Lord form, you can choose to either levitate or walk normally; you can only cast your spells while levitating, and will need to stop levitating in order to fight with your claws. When levitating, your right hand is automatically equipped with the Vampiric Drain spell and cannot be changed. Your left hand is used for your blood magic spells, such as Summon Gargoyle or Raise Dead. By bringing up the in-game favorites menu, you can switch the spell in your left hand and your active vampire power. You will take damage as normal from long falls while in levitation mode.

To descend to the ground and enter melee mode, press the sneak button. In this mode, you fight using your claws in a similar fashion to werewolves. You can also perform a "power bite" attack that will count toward your perk progress in the Vampire perk tree. To perform a power bite, use a power attack against a humanoid target when their health is extremely low. The power bite will not work if you do not have enough stamina to perform the attack, and it will work on any NPCs (including other vampires), but not on creatures. You can switch between modes as often as necessary while in this form. Your active vampire power can be used in either mode by pressing the shout button, though powers must be briefly recharged before they can be used again.

You will have a forced third-person view while you are a Vampire Lord, and you will not be able to access character menus or maps. Opening the character menu will open the Vampire perk tree instead of your normal menus. You will not be able to pick up any items or start conversations, but you can activate switches (such as levers and pull chains) to progress through dungeons (though you will be unable to interact with objects preventing the use of switches, e.g. the bones or scraps that must be removed to use certain switches in Raldbthar Deep Market).

You can use the "Revert Form" ability to return to your normal form at any time. If you have summoned a gargoyle while in Vampire Lord form, it will not disappear when you use Revert Form.

Unlike regular vampire abilities, which are determined by the stage of your vampirism, Vampire Lord abilities and enhancements are level-dependent. The following abilities are granted automatically by the Vampire Lord form, along with the Bats ability, which is the same regardless of your level. Other powers and spells can be added by unlocking perks in the Vampire skill tree.

While in Vampire Lord form, you will have access to a unique skill tree with perks that makes your special abilities more powerful. You gain progress to your next Vampire Lord perk by defeating enemies with Vampiric Drain or a "power bite" attack. The Vampiric Drain attack counts toward a perk when it kills all but the smallest of living creatures (birds, chickens, fish, foxes, and rabbits). Draugr and vampires will also advance your perk progress. Most other undead (skeletons, spirits, and dragon priests) do not give any progress gains, nor do constructs and summoned creatures. 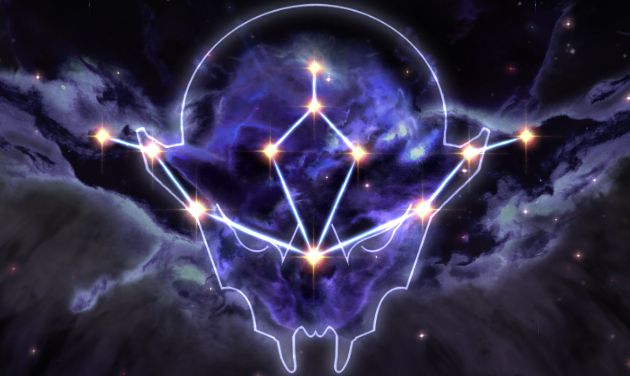 Power of the Grave

If you wander around Volkihar Keep in Vampire Lord form, some of the inhabitants may comment on it:

One achievement is related to being a Vampire Lord: