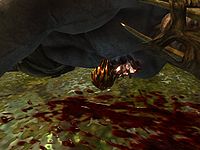 A briar heart lying beside its former owner

In terms of combinations of two ingredients, Briar Hearts can be combined with 57 other ingredients.

While their exact nature is unknown, due to its natural loot location from Forsworn Briarhearts, it seems they really do serve as actual hearts; from the look of events at Lost Valley Redoubt, dead Forsworn are resurrected in a ceremony by hagravens, replacing their human hearts with these items. Interestingly enough, pickpocketing the briar heart from a Forsworn Briarheart will instantly kill the target.