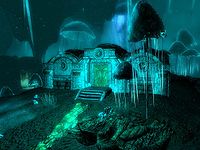 Sinderion's remains can be found in the room, still clutching his field journal, his body riddled with dwarven arrows. This is where Sinderion eventually found himself after having been shown a sample of crimson nirnroot by a passing adventurer during his time in Skingrad, as his journal reveals. Reading the journal (or collecting crimson nirnroot from the plant in the room) will trigger a quest to finish Sinderion's research.

Sinderion had set up a full research station in the laboratory, including an alchemy lab, an arcane enchanter, a workbench, a rare-type apothecary's satchel, a copy of the Alchemy skill book De Rerum Dirennis, and thirty different ingredients, which are listed in the table below.

Other items of particular interest are a pair of Leather Boots of Hauling and an Attunement Sphere. There is also a knapsack, two chests, a dwarven dagger, three soul gems (one filled lesser soul gem, one empty greater soul gem, and one random soul gem), and three potions, in addition to a typical range of Dwemer household items and scrap metal.