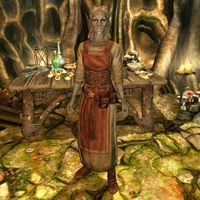 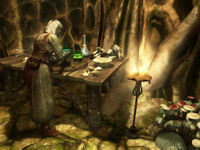 Elynia at her alchemy lab

Elynea Mothren is a Dark Elf apothecary and mycologist living in Tel Mithryn. She needs your assistance in repairing the Tel Mithryn tower and in acquiring certain ingredients for her. Having served Neloth for decades, she is frustrated that he would replace her if she does not immediately repair the tower, something she is unable to do due to her old age and reluctance to place herself in danger. According to Talvas, she seems to be friendly with Neloth's steward, Varona Nelas, often requesting her to purchase ingredients from Raven Rock.

She wakes up at 8am to tend her duties as apothecary, closing her shop at 8pm. She goes to bed at 10, but before the Sun Stone is cleansed, she will work there instead of sleeping.

She wears a set of merchant clothes and boots, and she carries an iron dagger, a key to the Tel Mithryn Apothecary, some assorted ingredients, and gold.

If she notices you, she will remark, "Hmmph. Another wanderer. I suppose you'll be wanting potions, just like the others." Sometimes she'll instead comment, "I like it here at Tel Mithryn. Hardly anyone bothers me. People can be so irritating." or "You'd think Neloth was still a clan leader in House Telvanni the way he carries on." At other times, she will comment on mushrooms: "Mushrooms and molds of Vvardenfell have adapted to the ash far better than the green plants." or "It's almost time to feed the mushrooms. They like a drop of blood every now and then you know." If she has received news of Varona's death, Elynea can be found mourning her: "It's a shame about Varona." If you encounter her at the Sun Stone, she will wonder how she got there, saying, "Who brought me here? They better not have touched my mushrooms. Neloth? Neloth! Is this your doing?" or "This just isn't right. Why was I working on that stone?" She may also tell you, "My back still hurts from all that stone work. Why were we at that standing stone anyway?"

When you ask her what she has for sale, she will say either "I've got the best selection of mushroom and fungi.", "I probably have some potions around here that might interest you.", or "Every type of fungus in Solstheim or Skyrim. Oh, and a few other ingredients and potions."

You can ask her if she came from Morrowind, and she will reminisce on her experience traveling to Skyrim: "Yes. That was a lifetime ago. I was just a young girl when Red Mountain erupted. Master Neloth was already old. My mother put me on a boat to Skyrim. The last time I ever saw her, she was standing on the dock as my ship sailed away."

If asked, she will proudly tell you what she does for Neloth: "I am his mycologist. He may have grown Tel Mithryn by himself, but I nurture it. Mushrooms and fungi are my life's work. When I saw Tel Mithryn I knew I had to be here. I've learned so much since then." Continue by asking if she grew this tower, and she will reply, "Me? No. That's Master Neloth's doing. I wasn't even born then. It's Telvanni magic at its best. He brought the cuttings with him from Morrowind and used sorcery to grow them."

If Varona is alive, Elynea will sometimes talk to her:

Elynea: "Are you going to Raven Rock soon? I need some thing."
Varona: "Soon. Be patient. Ulves is still making his list. And of course Master Neloth keeps adding to his. What with all the ash spawn on the road these days, I'm not leaving until the trip is worth it."
Elynea: "Bah! Patience is for the young. An old dunmer like me can't afford it."

Varona: "I'm sick of all this ash. I know dunmer aren't supposed to mind the ash, but I hate it."
Elynea: "It's a good thing you've always lived here on Solstheim. Vvardenfell is covered in ash. Red Mountain makes sure of that."
Varona: "So you've said a hundred times. But didn't you also tell me the Telvanni lands were green and lush?"
Elynea: "Maybe two hundred years ago they were. Now they say those green lands are ash covered too."

When you are searching for Varona, asking Elynea if she's seen her will have her say, "She left for Raven Rock hours ago. She promised to bring me back some fresh blisterwort." Later when you inform her of Varona's death, she will be shocked: "Dead? Oh, merciful ancestors! That blasted wizard couldn't be bothered to give her some protection for those trips. This is all his fault." She will bitterly point you to Neloth: "Best tell Neloth. I'm sure he'll mourn for all of two seconds."

During the quest Old Friends, asking Elynea about Ildari Sarothril, Neloth's former apprentice, will have her tell you, "She was a headstrong one. Always pushing Master Neloth to teach her more. Her lust for power was her undoing. She let Master Neloth do some ritual thing to her. We buried her out back. That was some twenty years ago now."

If you have not helped her heal Tel Mithryn, you may hear Elynea complaining about Neloth's treatment of her, saying, "Damn that man! He is being totally unreasonable.", "That ash eating wizard is always on me about his tower. It's not my damn fault the thing withered overnight.", or "I don't care if he's a Master Wizard. He can't treat me like this!" Asking her what Master Neloth did will have her explain the situation: "That fetcher told me to fix his house. If I don't, he'll find a new mycologist who will. Decades of loyal service, and he'd just throw me out like yesterday's breakfast!" If asked, she'll tell you what she needs to fix the tower, frustrated that she can't do it herself: "Three taproots soaked in the headwaters of the Harstrad river. I'm an old woman. I can't possibly make that trip. It's way too dangerous. If you get some taproots, I'll pay you to dip them in the headwaters and bring them to me."

Before you have three samples of taproot, you can ask her where you can get them. She'll say, "Where do you think? You have to cut it out of a Spriggan. Although sometimes you can buy them from alchemists." When asked about the Harstrad headwaters, she'll respond, "It's special to the Spriggans. They seem to like to gather there. Something about the waters attracts them. There are bound to be some there, so be careful."

Once you have the soaked taproots, bring them to her and she will respond, "Truly? Well done. I'll just keep two of them for myself. No need for Neloth to know. Take that last taproot and plant it into the wall of the withered house." Return to her after you've planted the taproot. She will hand you two leveled potions of well-being with the words "Good. Now maybe Neloth will get off my back about it. I suppose you think you should get paid for helping an old woman. Here. Take these. I'll sell you more if you come back later."

To start the quest Hunting and Gathering, ask her if she needs help. Her dialogue depends on which ingredient she currently needs:

Elynea: "I miss Varona. She used to help me with the gardening."
Drovas: "I can't help it if I have a black thumb. It's like the mushrooms hate me."
Elynea: "It's not your fault, Drovas. You do other things well. Varona was never able to do the repair work that you do."
Drovas: "Thank you. I didn't mean to be so defensive. I know Varona was your friend. It's okay to miss her."

Drovas: "Do you ever get lonely out here in the middle of nowhere?"
Elynea: "You complain too much. Tel Mithryn is the safest place in Solstheim. Only a fool would challenge Master Neloth."
Drovas: "I suppose you're right. At least here I'm safe from Mogrul."