The founder of Tel Mithryn, the eccentric and bossy Neloth is rumored to be a nightmare to work for. When you visit the apothecary you will find an unhappy proprietor, Elynea Mothren, wandering around badmouthing Neloth: "That ash eating wizard is always on me about his tower. It's not my damn fault the thing withered overnight." She then explains the problem. Apparently, something went wrong inside the tower and Neloth wants it fixed right away and will have no qualms firing Elenya if that can speed things up. When asked what she needs she will say: "Three taproots soaked in the headwaters of the Harstrad river. I'm an old woman. I can't possibly make that trip. It's way too dangerous. If you get some taproots, I'll pay you to dip them in the headwaters and bring them to me."

A map marker for the Headwaters of Harstrad will be added once you have three taproots, but two taproots can be acquired there, so you only need one. On Solstheim, taproots can be found in the following locations:

Once you have at least one taproot, travel to the headwaters, which are hidden between Benkongerike and the Wind Stone.

Note: A bug fix in the Unofficial Skyrim Patch allows spriggans to have either taproots or spriggan sap, so neither the headwaters nor the unmarked island are guaranteed locations of taproot. 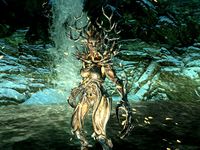 A Spriggan Matron in Harstrad Cave

The Headwaters of Harstrad is a small landmark and consists of a waterfall with a dead spriggan matron floating around in the water outside. Claim the taproot from the body, then dive headfirst into the waterfall and enter the hidden cave Harstrad Cave. Once inside, you will immediately be attacked by another spriggan matron, so dispose of it and claim the taproot if you need it. After the battle, the Headwaters will activate so follow the map marker and soak three taproots in the water. Before you leave, make sure to search the boss-leveled chest for some extra goodies, then return to Tel Mithryn. 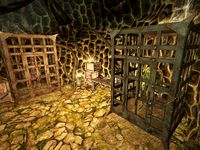 The new room in Tel Mithryn

Back in the apothecary, Elynea Mothren will be quite happy when you tell her the mission is accomplished. Hand her the three soaked taproots and she will, surprisingly, keep two samples for herself, saying: "I'll just keep two of them for myself. No need for Neloth to know. Take that last taproot and plant it into the wall of the withered house."

Head over to the tower where Neloth will wander around and complain as always. Find the withered area in the northwestern part of the laboratory and plant the taproot in it. Return to Elynea Mothren for a reaction and a small reward: "Good. Now maybe Neloth will get off my back about it. I suppose you think you should get paid for helping an old woman. Here. Take these. I'll sell you more if you come back later." She will then hand you two leveled potions of well-being. You are also free to take most of the ingredients displayed in her shop for free. Lastly, pay a visit to the tower where Neloth has built an entire new room, a testing area for spriggans, complete with two trapped spriggans in cages. Back in the apothecary, Elynea will also have a new job for you.