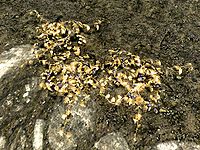 A jazbay plant on the roadside

Jazbay grapes as depicted in the Herbalist's Guide to Skyrim

Jazbay Grapes are harvested from vines that grow on top of rocky outcroppings, in Eastmarch's volcanic tundra. In addition to alchemy, they are used in baking the Jazbay CrostataHF.

"There was a time when it would be considered treason to pick one of these grapes without express permission from the Emperor himself. It is my understanding that although growers in Skyrim were successful in improving the fruit's survivability, it came at the cost of flavor. No longer is it quite the prize it once was. And yet, growing amidst the volcanic tundra of Eastmarch, it is still immensely useful for concocting potions. Mages value it highly as it can be combined with simple garlic to enhance the regeneration of magicka. While no longer against the law, picking these grapes in large amounts is best kept to oneself." —Agneta Falia in the Herbalist's Guide to Skyrim.

In terms of combinations of two ingredients, Jazbay Grapes can be combined with 45 other ingredients.

66 guaranteed samples can be found in 36 different locations. Locations with the greatest numbers are:

364 jazbay plants can be found in 22 different locations. Locations with the greatest numbers are: