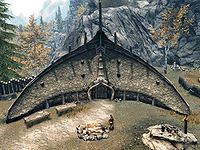 Largashbur Longhouse is the longhouse of Chief Yamarz, located in the Orc stronghold of Largashbur.

The longhouse is home to Chief Yamarz, Atub, Garakh, Gularzob (who will be named Chief after the end of the relevant quest), Lob, Ogol and Ugor.

The Largashbur Longhouse can be found in the Orc stronghold of Largashbur, near the entrance to the stronghold. Entering the longhouse is trespassing unless you have been named Blood-Kin to the Orcs. Any Orc can grant you this title, but they will only do so after you have done something for them. Then all Orcs will acknowledge your status and make you welcome.

Upon entering the longhouse, the firepit is opposite the entrance, in front of the southeast wall, with a couple of pots hanging over it. In the right-hand pot is a portion of grilled leeks. Around the hearth are a pair of leather boots and a woodcutter's axe on a pile of firewood. There is a long wooden table to the left holding several loaves of bread, a goat cheese wheel, two charred skeever hides, a potato, two bulbs of garlic and an iron dagger. Above the table is a hanging rack with two rabbits and a pheasant hanging from it. To the left of the table, still against the southeast wall is a set of shelves holding a bottle of alto wine, four bottles of Nord mead, a loaf of bread and a basket on the bottom shelf containing a cabbage. Hanging from the ceiling above the shelves are two garlic braids and a bunch of frost mirriam. There is a doorway to the north leading into a bedroom. There are food barrels and sacks all around the longhouse.

To the right of the fireplace is another set of shelves holding two bottle of Nord mead, a bear pelt and a random helmet and random gauntlets or bracers. There is a chair in front of this against the southwest wall. In the middle of this room is a small round wooden table and four chairs, with a small square wooden table in the northwestern corner with a further two chairs. A second doorway to another bedroom is in the southwest wall, with a sideboard to the right of the doorway, it holds a troll skull, a bottle of wine, three bunches of jazbay grapes and two fillets of salmon meat.

Through the doorway to the southwest, is a room with three single bed along the walls, an end table and a dresser that has copies of Thief of Virtue and The Real Barenziah, v1. There is a partitioned area to the north with a stool, bucket and copy of Brief History of the Empire, v2. Opposite this is a dresser with an unlocked chest containing minor loot. Beyond the toilet area is another tiny room with a single bed and level locked chest.

Through the doorway to the north is another bedroom this one is for the Chief, it has a large double bed coming out from the west wall, with an end table to the right and a dresser to the left of the bed, which holds a random potion of stamina and a copy of The True Nature of Orcs. There is also a medium coin purse on the floor to the left of the dresser. In the northern corner is an unlocked chest and against the east wall is a single bed with a table by the head and a pair of iron boots by the foot of the bed. On the table are five loose septims, a rock warbler egg, an Orcish dagger and random helmet. Above the table is a bookshelf with copies of The wolf Queen, v2, Chance's Folly, Brief History of the Empire, v1 and Argonian Account, Book 1, along with a potion of minor healing, a small coin purse and on a second shelf a bottle of wine and a bottle of Black-Briar mead.

The entrance to Largashbur Cellar is behind the longhouse. You will see a trapped door behind the barrels, bales of straw, and a level locked chest.