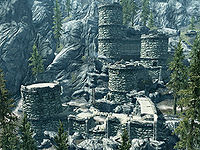 Mistwatch is a medium-sized fort located at the northern base of the mountains on the border of the Rift and Eastmarch, just southeast of the Atronach Stone on the edge of the hot springs. To reach the fort, travel along the road from Fort Amol to the southeast. After it crosses the bridge over waterfalls south of Darkwater Crossing, the road starts to climb heading east. Partway up there is a fork to the left, with an iron ore vein on the ground to your left. Follow the fork, and it will lead you directly to the entrance to the courtyard. Take care, as this road is heavily inhabited by leveled animals and creatures.

As you approach the fort, unless you are successfully sneaking, you will be warned to stay away by the four leveled Mistwatch Bandits that patrol the outer walls of the fort. To reach the courtyard, you can approach from the northeast or southwest; both approaches pass under arches. To the left of the northeastern arch there is a flight of stone stairs leading up to the top of the outer wall. At the top, beside the ruined tower, is a wooden table with a random arrow on it. North of the ruined tower is an intact tower with two doorways, one facing south and the other west. Inside the tower is a circular room containing several long wooden tables and benches with a total of four bottles of Black-Briar mead and three bottles of Honningbrew mead on and around the tables. The rest of the walls are empty with the exception of a lever to the left of a wooden bridge section, which will drop both halves of a wooden drawbridge that was built to replace a collapsed stone bridge. Dropping the bridge will allow access to the interior of the fort, comprising a set of sequential towers built into the mountainside.

Entering the first tower leads into a wide, curved corridor with a wooden door at the end and a doorway on the left. There is a small table on the right holding a loaf of bread. As you approach the doorway, you will hear a farmer by the name of Christer. If you talk to him, he will ask you to help him by searching for his wife Fjola. If you agree, the miscellaneous quest Mistwatch will start, and he will give you a key that opens all the doors in the fort. There is an apprentice-locked chest in the same room as him, along with a couple food barrels and a set of shelves holding an iron helmet, two random potions of healing, magicka, or stamina, an empty random soul gem, a pair of random boots, and a food sack. The wooden door at the end of the corridor is locked and requires the key Christer gives you to open.

Through the door is a large circular room with an opening to the north. In the room are two unowned bed rolls and a dresser containing random clothes near the west wall, while opposite is a long wooden table with three pheasant breasts, a woodcutter's axe, and a pheasant on it, with five more pheasants hanging from racks above the table. Beyond the opening there is an empty cart on your right and a stairwell curving up around the inside of the tower. There are a couple bottles of Nord mead on the stairs as you climb. On the landing partway up are three bear traps. A bandit patrols the top half of these stairs, and a magic-using bandit can be found in another circular room at the top. This room contains a pair of cupboards holding a random enchanted helmet, a random potion of stamina, a random poison, a bowl of troll fat, and an apothecary's satchel. To the right of these is a long wooden table with a built-in alchemy lab and a kettle containing two rock warbler eggs. There is a hanging rack above the table holding two bunches of dried elves ear and a rabbit. To the west is a leveled locked gate to a cell that contains two hay piles and some ragged robes. The lock to the cell isn't opened by the key received from Christer. To the right of the cell is an unowned single bed, with an unlocked chest against the northeast wall. Between the bed and chest is an alcove with a ladder up to a leveled locked trap door that can be unlocked with the key given to you by Christer, leading to Mistwatch Lower Balcony.

Outside is a lean-to with an unowned bed roll under it and a campfire with a cooking pot hanging over it. A path leads to a leveled locked door into Mistwatch West Tower; however, before entering, continue past the door to find an adept-locked chest.

As you enter this tower, there is another curved corridor with a set of shelves on the right holding a salt pile and a pickaxe. To the left are several unowned single beds against the walls, with two bandits roaming this level. There are also three tables holding a total of five bottles of Nord mead and a long taffy treat. There is an unlocked cell along the left wall, with a dead Imperial lying on the ground inside and shackles on the rear wall with blood splattered on the wall below, suggesting how the prisoner met her end. To the left of the cell is an unlocked chest, while to the right on a small square table is a note which gives more details about how she died. Opposite the cell is a set of shelves holding a satchel, an iron mace, a couple bulbs of garlic, a gourd, and several pieces of cheese. Farther along the corridor to the west is another curving flight of stairs leading up to the next floor. There are two more bandits as you climb, one partway up and the other at the top. The corridor continues circling the tower, passing a long wooden table against the inside wall holding a quiver of random arrows, a couple bulbs of garlic, two bottles of alto wine, and a drum, with a second drum under the table. Continuing around, before the door at the end is another table with an iron dagger on top. The door is level-locked and leads out onto Mistwatch Higher Balcony.

Apart from the trapdoor leading out of Mistwatch West Tower and a path across to the door into Mistwatch East Tower, there is nothing else of interest.

The east tower is the highest tower and home to Fjola, the bandit leader and wife of Christer. The door to this tower can only be unlocked if you have the key given to you by Christer. Entering leads into another typical tower, with a corridor curving off to the right and a set of shelves opposite holding three common books, a leather helmet, some random clothes, and boots. To the right is a second set of shelves against the inner wall holding a medium coin purse, an iron helmet, a pair of Stormcloak officer boots, a pair of iron boots, four loose septims, and seven common books. As you approach the end of the corridor, you will encounter a friendly Bandit Leader, Fjola (see the quest page for details regarding all options available at this point).

Past Fjola, the corridor leads into a central circular room with two cells and a room to the west. Both cells are empty and contain only unowned bed rolls. There is a long wooden table in the main room with a flute, a gourd, and four loose septims on top. The western room has an unowned single bed against the north wall, while opposite is a dresser containing random clothes and a row of three weapon racks holding a random warhammer and a random enchanted battleaxe. On the dresser is a random potion of stamina, a common book, and a copy of the Heavy Armor skill book Hallgerd's Tale. Finally, hanging from a rack in the southwestern corner of the bedroom area are two rabbits.

There is no shortcut back to Christer, except down the side of the mountain. Fast traveling to Mistwatch places you at the lowest level, so this may be helpful in getting back to him.