Darkwater Crossing from above

Darkwater Crossing is a small mining camp that operates the Goldenrock Mine. 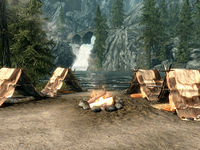 Annekke Crag-Jumper originally discovered corundum ore here and established what would become the Goldenrock Mine and settled here permanently with her husband Verner Rock-Chucker.

* This person only appears after completing Extracting an Argonian.

Darkwater Crossing's smelter and mine entrance

They built themselves a small house, planted wheat and vegetables, and raised chickens and a goat. Since then, the mine has attracted several new residents who have made camp outside its entrance. The miners are constantly worrying that the mine may be running out of ore. Two of the residents, Derkeethus and Annekke Crag-Jumper, can become followers and be chosen as candidates to join the Blades.

With the Fishing creation, some Fishing Supplies can be found next to the water, along with drying salmon and some netting.

The residents of Darkwater have unwittingly put themselves in danger by settling so close to Darkwater Pass, a hidden Falmer-infested cave. Although one of the residents has already gone missing, they are still unaware of this danger.