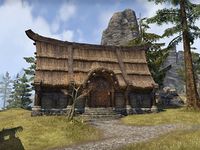 Darkwater Crossing is a settlement located along the banks of the Darkwater River in southern Eastmarch.

The area was first settled during the time of the Ebonheart Pact, when a group of Argonian migrants came from the west to settle at Fort Amol. The town was not big enough to absorb them, so instead, they settled at Darkwater Crossing. Despite being an Argonian village, it was built using Nordic architecture. At some point, a Redguard named Asmalah the Caller came to the village with his sick wife. The village healer, a Dreamwalker named Stormy-Eyes, attempted to use his powers to cure her, but instead, his methods resulted in her death. Circa 2E 582, Asmalah got his revenge by surrounding the village with blood, causing trolls to attack. The surviving Argonians fled to a nearby cave, and it was hoped that the town could be retaken after the death of the trolls' leader, Death-In-Winter.[1]

The area was re-settled in the Fourth Era when Goldenrock Mine was opened after a Nord woman named Annekke Crag-Jumper discovered corundum deposits nearby.[2]In 4E 201, during the Stormcloak Rebellion, Ulfric Stormcloak was captured near the settlement in an Imperial ambush before being taken to Helgen for execution. The Rebellion had a bad effect on Darkwater Crossing, with soldiers passing through constantly and the miners only scraping by.[3]