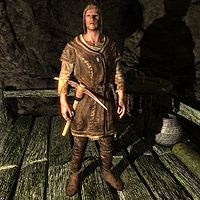 Verner Rock-Chucker, a Nord warrior, is a miner found in Darkwater Crossing. He was one of the original settlers of the mining camp along with his wife, Annekke Crag-Jumper, after she discovered Goldenrock Mine. They own and live in the only house located at the camp. He claims to love his wife greatly, but is annoyed by the fact she continuously goes out adventuring rather than helping out in the mine. Their daughter Sylgja seems to have inherited some of her wanderlust and works in Shor's Stone as a miner.

Verner is worried that the mine will eventually run out of corundum ore, so he will pay for any that is brought to him.

Verner wears a belted tunic along with a hat and a pair of boots. He wields an iron dagger and carries a pickaxe along with a selection of common loot and gold.

When you first meet him, Verner will be quick to offer you some work: "You looking for work? We could use an extra hand in the mine. Just bring me any Corundum you dig up." He will then change the subject and begin to talk about his wife: "Annekke used to help more with the mining, but nowadays she's a bit of a bounder." He will then elaborate on this: "I do love my wife. Just wish she'd get her head out of the clouds." Perhaps thinking he's saying too many negative things about his wife, Verner will then tell you about Annekke's extensive knowledge of the local terrain: "If you want some information about the area, Annekke knows it better than anyone." Verner will then reveal to you that his wife may have more interest in finding new locations than spending time with him: "Sometimes I feel like Annekke cares more about finding new rocks than being with me." If you're visiting Verner for the related quest and tell him you have a package for him from Sylgja, he will be happy to hear from his daughter and will also ask you to deliver something for him: "It's a shame our daughter couldn't make the journey herself, but at least she still thinks of us. If you wouldn't mind bringing this back to her for us, I'd appreciate it." 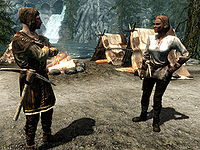 Annekke: "Verner, you should have come out with me yesterday. I found the most amazing tree growing right out of a cave."
Verner: "And I found a new deposit of amber. Would have been nice to have some help pulling it out."
Annekke: "You used to love finding new places."
Verner: "I still do. I just like to have food waiting for me when I come home."

Verner: "Ever think about spending more time around town?"
Annekke: "Not when there's so much to see!"
Verner: "I guess I should join you more often."
Annekke: "You should. I miss you."

Verner: "Sweetheart, did you move my pickaxe?"
Annekke: "It's at the south end near that loose rockpile."
Verner: "So you can be helpful sometimes."
Annekke: "No need to get snippy."

This Skyrim-related article is a stub. You can help by expanding it.
Retrieved from "https://en.uesp.net/w/index.php?title=Skyrim:Verner_Rock-Chucker&oldid=1344446"
Categories:
Hidden categories: