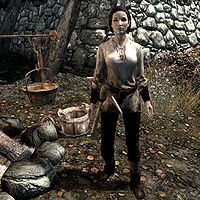 Sylgja is a Nord miner of Shor's Stone. Her parents are Verner Rock-Chucker and Annekke Crag-Jumper in Darkwater Crossing. She has been unable to visit them due to a leg injury and only recovered at all thanks to a passing priest of Mara.

Sylgja starts off her day by waking up at 5am and resting for an hour in her house. At 6am, she proceeds to Redbelly Mine, where she works for most of the day. She will be mining for twelve hours until 6pm, when she finally stops work and heads home. She will relax in her house for an hour until 7pm, and then spends four hours around the campfire at Shor's Stone. She will be either cooking or simply sitting by the campfire until 11pm, when she heads back home to sleep. She sleeps for six hours and repeats her schedule the following day.

Like most miners, she wears a set of miner's clothes and a pair of boots. She is equipped with a pickaxe and carries the key to her house, as well as a selection of common items and gold.

She can be married after you have done her a favor by delivering a satchel to her father. If you choose to move in with Sylgja, you will have full access to her house and items and she will carry on with her regular schedule.

Her potential greetings can be:

"Came all the way out here to see us, did you?"
"I suppose you're used to traveling, being a stranger around here."
"Welcome to Shor's Stone."
"Making that trip to Darkwater Crossing was a huge help. Thank you."

Tell me about the mine.
"I might be a woman, but I can crack rock with the best of them. Be careful in there, you can take a nasty spill."
You're not well? What's wrong?
"I had a bad fall in the mine when I was bringing some food to the men. I was pretty bad off for a while, but a priest of Mara was passing through on his way to Dawnstar and healed me to the best of his abilities. I'm still pretty sore and can't really walk too far without having to rest for a while."

When you exit conversation with her she will say:

She can greet you with:

"Would you happen to be headed towards Darkwater Crossing?" OR "Have you ever been to Darkwater Crossing? Terrible name for such a beautiful place."
What's been sending you to Darkwater Crossing?
"My parents live there. I usually make the journey to bring them gifts and to just say hello, but I haven't been well lately. I've written some letters and placed them in a satchel. Perhaps you wouldn't mind delivering it to them on my behalf?"

No, I'm not really headed that way.
"Yes, indeed."

Sure, I'll deliver it.
"You would? Well then, I would insist on rewarding you for your time. Here, take my satchel and give it to my father, Verner. He'll likely have something for you to bring back."

If spoken to again she will say:

"Darkwater Crossing is a difficult journey. Mind yourself."

As soon as you arrive back from Darkwater Crossing, Sylgja is delighted and rewards your efforts:

I'm back from Darkwater Crossing.
"Ah, yes... seems he sent back my satchel stuffed with letters. I look forward to reading them. I appreciate the delivery, here... I want you to have this. I insist."

When the miners gather around the campfire in the evening, Sylgja will have several conversations, some more pleasant than others:

Grogmar: "I've been watching the way you mine and I have to say, I'm very impressed."
Sylgja: "I owe it all to my father who started me swinging the pickaxe when I was a barefoot little girl."
Grogmar: "Well, it shows. Your skill rivals some of the greatest miners I've known."
Sylgja: "Thank you. It's nice to know someone admires me for more than just my appearance."

Odfel:"Sylgja do you fancy a walk tomorrow?"
Sylgja: "Odfel, I've told you time and time again. I'm not interested in a relationship with you."
Odfel: "And why not? I'm handsome, strong and smart. What else could you possibly need?"
Sylgja: "I need someone that cares about me more than they care about themselves. That person isn't you."

Filnjar: "How are your parents faring, Grelka [sic]? Doing better than we are I would guess."
Sylgja: "It's no feast in their neck of the woods either. Last time I was up there, father said they were barely scraping by."
Filnjar: "This civil war is taking its toll on all of us. Miners are some of the hardest hit."
Sylgja: "That's what scares me. I'm afraid I'll travel to Darkwater Crossing and find it burned to the ground."