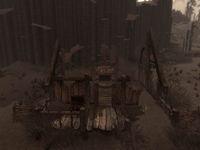 Old Attius Farm is an old abandoned Imperial farm on the outskirts of Raven Rock. It is located along the road exiting Raven Rock to the south, and has been abandoned since the Red Mountain erupted.

The first time you approach the farm, Captain Veleth will be battling three ash spawn. Once the ash spawn are dead, you will receive a miscellaneous quest objective to talk to the captain. Speaking with him initiates the quest March of the Dead. Outside the house is a dead Redoran guard that carries an Elven sword, bow, and arrows, and a full set of Bonemold armor (the chest armor is the pauldron version).

The Ghosts of the Tribunal Creation adds a trapdoor to the house leading to Old Attius Farm Cellar. You will need to enter the cellar during the quest Buyer Beware.

There are an additional seven trama roots growing in the immediate vicinity, and a large number of scathecraw plants between the farm and Raven Rock.